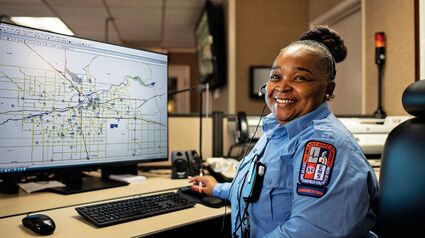 They are among the hidden first responders who are rarely seen but always heard and appreciated. The calm voice in the dark, the heroes behind the scenes: emergency medical dispatchers (EMDs).

During the week of April 10-16, Hall Ambulance's EMDs, who serve as a vital component of Kern County's 9-1-1 system, will be celebrated as part of National Public Safety Telecommunicators Week (NPSTW). This annual recognition honors the thousands of men and women who serve as the access point to emergency services, ascertain what assistance is needed, respond the appropriate level of help, and can relay life-saving instructions over the phone to assist those in need.

"When someone falls victim to sudden illness or injury, these dispatchers are there to answer the call," said Lavonne C. Hall, president, and CEO, of Hall Ambulance. "We are grateful for their dedication and commitment to the communities we serve."

While the core of Hall Ambulance is its Ambulance Division, the Company's Operations Control Division (OCD) serves as its nerve center. Working in unison with Kern County's Emergency Communications Center (ECC), OCD dispatches 100% of all ambulance requests received throughout Kern County's 8,132 square miles.

Like their Ambulance Division counterparts, the Company's dispatch center operates around the clock-never closing. In 2021, these communications specialists processed over 135,000 dispatched calls for medical aid. The work is nerve-rackingly fast-paced, especially during each swell of the pandemic. Still, a casual observer sitting in OCD would be in awe at the sense of cool, calm and collectedness exhibited by the dispatchers. Their work also entails radio transmissions (65,000 logged last October), handling incoming and outgoing phone calls (topping 25,000 per month from October – January), and providing pre-arrival instructions, i.e., guiding someone through performing CPR or the Heimlich maneuver prior to the ambulance's arrival (700 in November).

Being able to perform at such a high level, Hall Ambulance holds the highest distinction in the industry as an ACE Accredited Center of Excellence by the International Academies of Emergency Dispatch since 2011. Hall Ambulance was the second in Kern County and the 154th of about 300 dispatch centers worldwide to have earned this recognition.