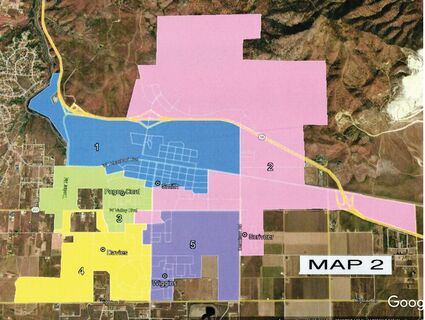 The City of Tehachapi is getting a new redistricting map.

Mitchell Pearce from USgeocoder was hired by the City to aid in redrawing the district lines following the 2020 census. Pearce said the goal of redistricting is to create districts based on efficiency of delivered city services and the fairness of voting or a "one person, one vote" mentality. This means aiming for the smallest deviation in population between districts and avoiding voter confusion from drawing them out of their district.

On March 21, the Tehachapi City Council held their fourth public hearing concerning the revised city council redistricting. Two maps were presented to the council. The original districts had a population deviation of 4.52%. The map generated by USgeocoder, had a 1.82% deviation. By contract, this map was required to have similarities with the previous map. Ashley Whitmore found issues with how the districts were drawn and was not restricted by such a contract.

A public workshop was held on Feb. 7 for the public to create and submit their own maps. Whitmore began working on her own map and submitted it for public debate. First, she found that streets made better borders for districts in comparison to backyard fences, a premise backed up by the Fair Maps Act. Whitmore's map borders, therefore, are all denoted by city roads. Because of Whitmore's extensive knowledge of Tehachapi and its neighborhoods, she was able to create a map with only 0.75% deviation between districts and better group together similar communities.

While the goals of the Fair Maps Act are not explicitly to keep incumbent council members retaining their seats, both maps allowed for council members to keep their seats. Neither map focuses on racial or cultural differences as Tehachapi is fairly homogeneous with an even distribution across all the districts.

In the adopted map, District 1 is focused on Downtown Tehachapi's Residential Community, and on the exclusively small businesses that compose downtown. District 2 is focused on the residential communities that share Dennison Road as their major route. District 3 contains the commercial corridor on Tucker and the neighborhoods north of Cherry Lane. District 4 contains the residential neighborhoods south of Cherry Lane, extending to Highline, and contains the future housing development of The Address. District 5 contains Tehachapi High School, Tompkins Elementary School, and the possible future construction of Sage Ranch with the district's boundary is defined by Curry, Valley Blvd, Dennison, and Highline.

How does this affect the voters? While you may find that you are in a new district number, the district itself is mostly unchanged. One of the goals of the redistricting is to keep lines mostly the same in order to cut down on potential confusion from the public.

At the meeting, Mitchell Pearce praised Asheley Whitmore for her excellent work on the map. Pearce wrote in his letter to the city, "Mrs. Whitmore, as a resident and city servant is privy to local history and first hand experience regarding how things work or could work better in Tehachapi. Also, she has no obligation to defer to previous maps. I commend her for presenting a map that has smaller deviation from the mean than mine."  Pearce added during the meeting that if she were around in 10 years, he'd be honored to work with her again.