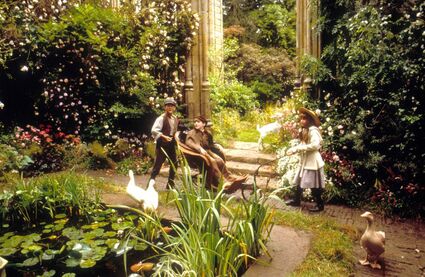 "The Secret Garden" (directed by Agnieszka Holland, and executive-produced by Francis Ford Coppola) is a film about grief and the many forms it takes. After her parents are killed in a tragic earthquake, Mary Lennox is sent to live with her reclusive uncle in the English countryside. Mary begins to uncover the various secrets that are hidden about the manor and the people who live inside.

The titular garden is legitimately a beautiful sight. The flowers and vines imbue the film with lovely green. Color in this film, overall, is well used. The gray and bleak winter sells the angst and the misery of all the characters at the beginning of the film. The manor feels overbearing and cold. The empty hallways feel vast and devoid of color. As the mysteries of the garden begin to fade away, more color is added to the screen. The dreary rooms of the children are eventually bathed in golden sunlight by the end of the feature. The English countryside should get an honorable mention as a sight to behold. The rolling green hills with cloud shadows running across makes me feel nostalgic for a country I've never visited.

Maggie Smith (aka Professor McGonagall) does an excellent job being hateable as Mrs. Medlock. The grieving uncle is played by John Lynch who does a decent job playing an eternally grieving man. However, I feel he is a bit better dressed and his hair is much more beautiful than what I'd expect from the character. The servant girl Martha and her outdoorsy brother Dickon are both quite enjoyable. I would have preferred a movie about those two instead of the other two children. The children, Colin and Mary are really unlikeable for the majority of the film, but I think that's intentional. They have both lost their respective mothers and are actively getting over it.

The pacing in the film is not great. It takes 30 minutes to actually find the secret garden. At the end of the film, the resolution of both the uncle and Mary's acceptance of grief, and allowing themselves to experience life, feels rushed. Today, most stories will get through its first two acts by the 40 minute mark, leaving the rest of the film for the climax. The ending narration of, "My uncle learned to smile and I learned to cry," is a nice line, but it doesn't feel as though Mary or the Uncle have earned this resolution. The only one who looks to have earned anything is the poor boy who has Munchausen (syndrome) by proxy. I wouldn't recommend that anyone seek this film out, but if Wes Anderson did a remake, I'd watch it.