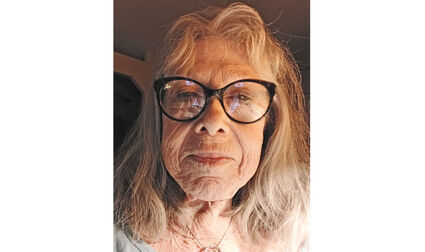 Judith Ann Whitfield, 83, passed away on March 20 in Bakersfield after a lengthy battle with an eating disorder.

Judy was born in San Francisco to Ralph and Alice Rogers and was raised by her parents in the redwoods near Leggett Valley, California. After her father's death, her mother moved Judy and her younger brother Ralph Rogers to Eureka, California where she attended grammar and high school.

In 1955, Judy met her husband Rodney L. Whitfield in Eureka. They were married there on June 23 the following year. They moved to Inglewood, California where Rodney attended an aviation school. Judy and Rodney had three sons and a daughter: Steve, Terry, Robert and Kelly. Judy loved animals and attended a dog grooming school in Orlando, Florida. After graduating and obtaining her license, Judy opened and operated a dog grooming shop in Christmas, Florida for many years before eventually moving back to California. Judy was also an accomplished artist. She displayed her paintings in several Tehachapi galleries.

Judy was preceded in death by her parents and her son Terry. She is survived by her husband Rodney; brother Ralph Rogers of Fort Worth, Texas; son Robert Daniel and his wife Fernanda of Merced, California; son Steve Loren of Walker Basin; daughter Kelly Lynn of Salem, Oregon; eight grandchildren and many extended family members.