Miner's Lettuce: the most easily foraged plant of all 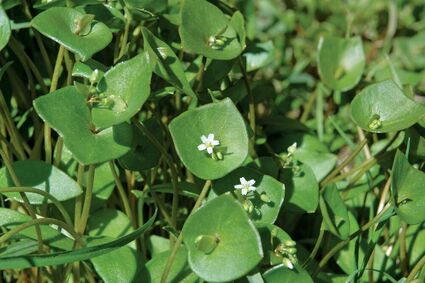 The tiny white flowers of Miner's Lettuce made their first appearance this week.

This is the time of year when it looks like tiny lily pads have suddenly appeared in shady spots near the base of trees, or below moss-dappled boulders half submerged in the surrounding soil, and along gentle slopes and beside meandering shaded footpaths. These welcome clusters of round leaves with miniature white flowers in the center are the unmistakable sign of Miner's Lettuce.

This pleasant annual is a California native that does best in wet years, but still manages to make at least a cameo appearance during drier years. The seeds germinate with the first rains or melted snows of autumn or early winter, but the little plants are only subtly visible and go unnoticed.

The First People of the Tehachapi Mountains, the Nuwä (Kawaiisu or Southern Paiute) named this plant uutukwa'arübü, which is pronounced oo-tuh-kwah-ah-RUB-uh. Regular readers of my work will notice that I include Nuwä names for plants, animals, place names, etc. whenever I can.

There are several reasons for this. The primary one is simply a matter of respect: Native Californians lived in this land for a millenia, and they gave names to the living things and objects around them. Including these original names acknowledges that the Nuwä and other indigenous peoples came first. They earned their naming rights, as they managed to survive and thrive while they moved through the landscape and tended the wild.

Nuwä was the language spoken in the Tehachapi Mountains for thousands of years, and Spanish and English didn't arrive until about 175 years ago. So I try to recognize that and honor those countless generations of earlier, resourceful people.

Another reason that I like to include and share Nuwä names is for the information and wisdom that they contain. Words in Nuwä and other oral languages needed to make sense to those who spoke them. Animal names, for example, are often onomatopoetic, an approximation of the sound that particular creature makes – the name for Pacific Chorus Frog is wogit, pronounced wawh-git, and you can hear the male frogs singing "wogit, wogit" every night this time of year.

Plants don't make much noise, of course, but their Nuwä names may still convey information about them. The word for Stinging Nettle, for example, is kwichi'ataab, pronounced kwi-chi-ah-TAAB-uh, which means "bad plate" – indicating that the irritating leaves of this plant would indeed make a bad choice to use as a little plate for food.

The word for Miner's Lettuce, uutukwa'arübü, literally translates to "under the rain" plant, and refers to the observation Miner's Lettuce does appear after rains have greened things up in late winter and early spring. The "under" part probably references the fact that low-growing Miner's Lettuce, which only grows from one to four inches tall, is typically found under oak trees and other at least partially shaded areas.

The later term Miner's Lettuce came from the fact that it was eaten by gold miners, some 300,000 of whom flocked to California after word got out that gold had been discovered at Sutter's Mill in 1848.

These miners arrived before there were many farms in California, and many of them subsisted on flour, dried meat, salt pork, and other foods that contained little Vitamin C. As a result, many of them suffered from and even died from scurvy – at least 2,000 to 3,000 miners succumbed in the years 1849 and 1850, and some historians estimate as many as 10,000 miners died of scurvy. In the mining camp of Sonora, a hospital exclusively for the care of scurvy-stricken miners was established in the fall of 1849.

Long distance sailors had learned more than a century earlier that lemons, oranges and limes could cure scurvy, though the presence and role of Vitamin C hadn't yet been discovered. Those in the mining camps were aware of this citrus cure, and as a result the demand for lemons and oranges in California's Gold Rush days helped initiate the state's famous citrus industry.

Sadly, there were many different native plants that could serve the same purpose as sources of Vitamin C, and no one needed to have died from this entirely preventable malady. One of the easiest to find and use was Claytonia perfoliata, which was given the name Miner's Lettuce since it proved to be the salvation of many scurvy-stricken miners. The gold seekers were made aware of this remedy by Native Californians. 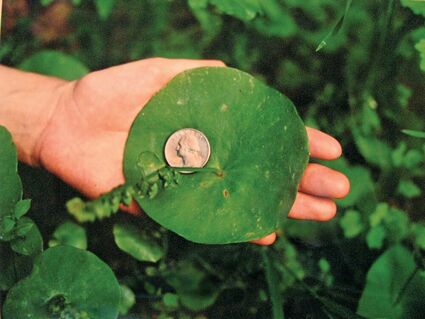 I found this Miner's Lettuce pad many years ago, and it's still the largest I've seen. It grew during a wet year in a shady little canyon beneath a Blue Oak.

According to a study in the Journal of the American Dietetic Association, a salad's worth of Miner's Lettuce, 100 grams, contains a third of your daily requirement of Vitamin C, 22 percent of the Vitamin A, and 10 percent of the iron. And as many California children are taught growing up, you don't even have to prepare it – just pick some leaves and start eating them. Or they can be placed in salads, on crackers, as pesto, etc. Miner's Lettuce can be used for pretty much any recipe that would use spinach.

So now is the time to look for Miner's Lettuce, and if you forage some, give thanks to the earlier people who used and appreciated this California native plant.