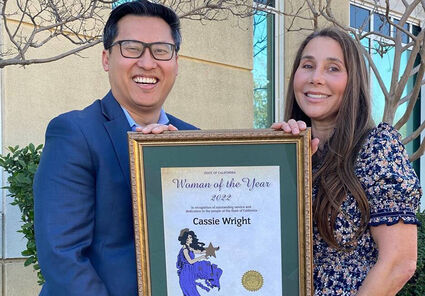 In recognition of her community service, Cassie Wright was named by Assemblyman Vince Fong as the 34th Assembly District's 2022 Woman of the Year.

Wright is known for her dedicated service to the many charitable organizations in Kern County. Most recently, Wright brought 911 At Ease International to Kern County to provide free mental health services for first responders and their families.

"As a business leader, philanthropist and community advocate, Cassie is especially deserving of this honor," said Fong (R-Kern County). "Her dedication and passion for our community is the driving force behind all that she does, including helping build a new neonatal intensive care unit and bringing an essential service like 911 At East International to Kern County."

"First responders and their families give so much of themselves to the communities they serve," said Wright. "It is important that we prioritize their well-being so they can be the best version of themselves at home and in the field. I am so honored to be recognized by Assemblyman Fong as Woman of the Year and to spread the word about 911 At Ease International."

Founded in 1987, the Woman of the Year event celebrates the contributions made by remarkable women throughout California and honors them for their accomplishments.