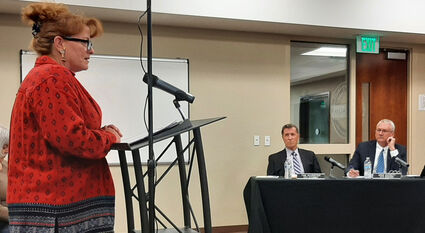 Gina Christopher of Have a Heart Humane Society appeals to Tehachapi City Council.

The Tehachapi City Council began their March 7 meeting by recognizing Tehachapi's community service organization #loveTehachapi, which received the Regional Award of Merit for Community Involvement from the Kern Council of Governments (KernCOG). The group had been nominated for the award by the City of Tehachapi. Read the full story on page 3.

Approved by the Council was an airport dust mitigation agreement with the Eastern Kern Pollution Control District for a grant to control dust at the east end of Tehachapi Airport. In 2020, the city received a first grant from the Air Pollution Control District to be used to control dust that was being pushed into surrounding neighborhoods by incoming aircraft as well as the ever-present Tehachapi winds. The initial application to 20 acres was so successful, the City has applied for the grant again to be used at the east end of the airport to protect housing in that area.

The product, supplied by Soilworks, produces an eco-safe, biodegradable, liquid copolymer that provides erosion control and dust suppression. The grant comes from funds received by the Eastern Kern Air Pollution Control District from "air quality impact" funds collected through the DMV from the annual vehicle registration of every vehicle registered in East Kern. The funds are used for projects related to reducing vehicle emissions in compliance with the California Clean Air Act. Mayor Protem Michael Davies recused himself from the vote as he is the chairman of the Eastern Kern Air Pollution Control District.

New developments within cities are required to pay special taxes that can be collected from property owners to be used for funding police protection, street maintenance, infrastructure, landscaping in public areas and other improvements and services within the development. The Tehachapi City Council unanimously approved such a district for the new development called, The Address, that is to be located at the northeast corner or Tucker Rd. and Highline bringing the new development one step closer to breaking ground. Final approval will be at a Public Hearing at the April 18 City Council Meeting. Fees will not be levied for the new district until the land is subdivided and the homes built.

During the public comments portion of the meeting, Gina Christopher and Ruth Ann Jennings from Have a Heart Humane Society appealed to the City Council for assistance in maintaining spay and neuter clinics in Tehachapi. Christopher said spay and neuter now cost $200 per animal and in 2020 Have a Heart adopted out 220 dogs and 185 cats. Have a Heart had appealed to Kern County Animal Services and they said they could no longer help and are no longer taking cats. The "SnipBus" will no longer come to Tehachapi although it goes to Lamont and Boron. City Manager Greg Garrett said that while it is not normal procdure to reply during public comments, he is very much aware that there is a real problem in Tehachapi. Garrett said he would contact Supervisor Zack Scrivner and Nick Cullen of KCAS to seek a possible solution. The city has a contract with animal control. Mayor Phil Smith, when told the Mojave Shelter was now closed, asked if there was a possibility of having a shelter here.