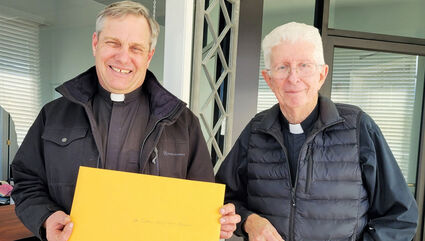 Father Wes Clare and Deacon Dennis Mann turning in the closing documents to Chicago Title to purchase the campus.

Father Wes Clare of St. Jude's in the Mountains Church recently shared some of the local church's history and the journey on which God has led them.

The church building, located on South Curry Street in Tehachapi was originally built in 1982 by the congregation itself, some members of which were licensed contractors. A fairly modest place of worship, it's a lovely and serene space. There's even a charming stained glass window in the east wall, above the altar, which according to Father Wes holds sentimental value to the church members who worship there.

Near the turn of the millennium, although the local Tehachapi church has a history of unity, a break at a higher organizational level occurred in which Southern California Episcopalians sued the diocese to which St. Jude's in the Mountains belongs. Father Wes explained that St. Jude's and the Episcopal church are both considered Anglican, but that they belong to different provinces within the Anglican Church structure. There were several theological and interpretive differences that developed over many years, culminating in the lawsuit that dragged on for seven years. In simple terms, they (the Episcopalians) were able to convince a judge that they were the "real" diocese and that the others had no right to approximately 40 church properties, including St. Jude's in the Mountains. Fortunately, the judgment did not include the affected churches' bank accounts.

October 2015 marked the beginning of a time of difficulty for the members of St. Jude's. "Losing our building was worth it," Father Wes said, putting the judgment into as positive a perspective as possible. "We would gladly lose all of our belongings to follow Jesus. And we were still a viable congregation. We just had to change our meeting space." Still, their beloved church building was no longer theirs. Not only were they displaced and bereft of their sanctuary, but they were forced to watch helplessly as the building they had labored on so long and devotedly sat dormant and fell slowly into disrepair.

But Tehachapi stepped up. As the community saw what had befallen St. Jude's, Marvin Slifer - then pastor of Mountain Bible Church - and his congregation wholeheartedly offered them a place to meet and worship. St. Jude's gratefully accepted the offer and began renting the fellowship hall.

In January 2019, Rudy Ramirez purchased both the old Moose Lodge building on Curry Street and the St. Jude's church property. Ramirez, unaware of the church's backstory, intended to rent the building to another congregation. However, for some reason that never happened. "By their great kindness, the City [of Tehachapi] let Rudy know about us," said Father Wes, which prompted Ramirez to offer to lease it to St. Jude's, with an option to buy.

The St. Jude's congregation gratefully seized upon the offer. The building was in "rough shape," according to Father Wes. "It had lain fallow for several years. We thought we would never see this campus again," he said. They had been hoping to purchase a property at some point in the future. But as Father Wes pointed out, "God is faithful."

To buy back their beloved building would cost $400,000. They needed to raise a minimum of $130,000 to qualify for the loan. They already had $90,000 in their building fund, so they got busy raising the rest. They held various fundraisers, including yard sales and they rented a booth at the Apple Festival to help raise funds and awareness of their situation. At the end of December 2021, they received some private donations that took them over the top and helped them reach their goal.

"God blessed us. His hand guided us all throughout the process," said Father Wes. "The City [of Tehachapi] has been so kind and supportive." They went so far as to grandfather St. Jude's in, waiving the requirement for major code updates. The City only required that the fire codes be met and a few other minor updates.

Father Wes likened the experience of St. Jude's in the Mountains to a Bible story found in Genesis 22. In the story, God told Abraham to offer his son Isaac on an altar, but instead prevented Abraham from following through with the act by providing a ram in a thicket to serve as a substitute for Isaac. This experience has been "our ram in the thicket," said Father Wes. 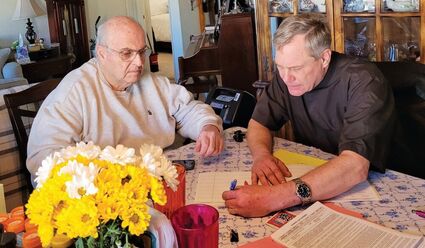 St. Jude's in the Mountains is located at 1200 S. Curry St., Tehachapi. Each Sunday they meet for Adult Sunday School at 9 a.m., followed by Worship Service at 10 a.m. Call (661) 822-3607 or visit their website http://www.stjudesinthemountains.com for more information about their ministry and events. All are welcome at St. Jude's.