Playwrights' Festival: A Giggle in Time 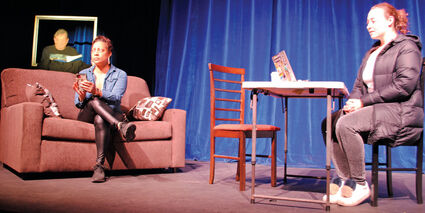 The Playwright's Festival is coming up at the BeeKay. A Giggle in Time, hosted by Tehachapi Community Theatre (TCT) and executively produced by Chris Morales and Kenny Chugg, features eight comedic scenes. With 30 different submissions, these scenes were handpicked by eight judges, each choosing their top pick. The show premiered on Friday, March 18.

Here's a synopsis of each play:

Together, the opening show, features stepsisters who, in the midst of the pandemic, cannot get off each other's nerves. While one tries to Zoom, the other cannot help peeking at each alluring individual on the screen. Both vie for the attention (and wealth) of their paranoid father who adorns a slightly outrageous mask throughout the scene. An act that's both relatable and hilarious.

Grace Finds Kel, the second short, stars Grace, a social worker who only wants to make the lives of those around her better. She comes upon a homeless wanderer, Kel, and vows to get him cleaned up and taking part in civilized society once again. But Grace and Kel have differing ideas on how one lives a "good" life.

In the Out Door, features a secretary's office. Two grown men play a game of hide and seek; one hides from his boss, while the other tries to find the employee he's trying to fire. Things go awry and do not turn out as expected. As Chris Morales put it, "Two men, one job, and dinner at eight."

Emeritus (adj. an honor, received at retirement, added to a title; "professor emeritus"), features an old couple George and Martha. George is set to receive an award for his long and fruitful years as a professor. But this couple cannot seem to get out the door. And hold on, don't forget your pants, dear! A hilarious play on the relationship between old age and memory.

One man's trash is another man's treasure in the next scene, Under Glass, we open in a yard sale showcasing a multitude of eccentric looking paraphernalia. In walks a fancy-pants couple who definitely know expensive art when they see it. And oh, do they find some treasures.

Set in a therapist's office the ensuing play, Children Are from Mars, follows a young couple as they argue over their future and parenthood. What's makes things a bit more complicated is the fact that Roberta and Joseph are astronauts set for Mars. With the help of a therapist, this couple learns what matters to them most.

As Chris Morales summarized, "Attitude meets art," in this next play Perspective. Leroy is just trying to enjoy art in peace at a museum when up comes Linda, a haughty, insolent art student who thinks she knows better than this old man next to her. They end up arguing about the meaning of the art, but end up finding out they have more in common than first realized.

R.I.P. Mr. And Mrs. Death stars Rachel Isabella Polito (get it?) as she tries to get some sleep with prescribed sleeping pills. But destiny has other plans for her. Enter Mr. Death, attempting to do his job, and Mrs. Death, attempting to disrupt her husband from doing his job. But, oh no, she's awakened! And Rachel cannot tell if she is experiencing reality, or a med-induced lucid dream.

Each 10 minutes, these plays will have you laughing your socks off. The featured writers, Neill D. Hicks, Herb Isaacs, Mark Littman, Rex McGregor, Dana Schwartz, David Shacklock, Tom Walla, and Jacqlynn Walters, come from a wide range of places including Tehachapi, Los Angeles, and as far as New Zealand! And the directors, Andi Hicks, Chris Morales, Liz Tiede, Dave Faber, Gary Mazzola, Lisa Meridth and Leslie Reynolds, all have expertly tweaked each scene to hit those gags.

A Giggle in Time will be showing through to March 27. And don't forget, each show includes voting for your top three acts! At the last show, the top voted three acts will be announced and awarded.