Spring wildflowers: a show of color 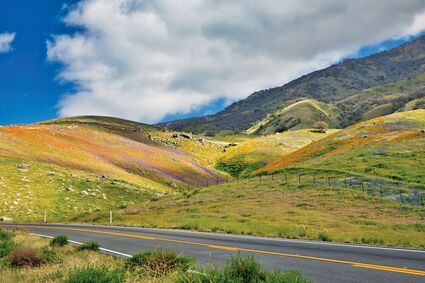 Wildflowers blooming alongside Highway 223, the road to Arvin.

Spring wildflowers in the Tehachapi Mountains are abundant during wet years, and scarce during dry years. Since California and the West in general have been in such a period of prolonged drought, it seems that we've had more misses than hits lately when it comes spring flowers. But there is at least a modest bloom along the western Tehachapi foothills.

If you've driven to Bakersfield lately, you may have noticed some California Poppies blooming on hillsides and sandy washes in the vicinity of Murray Family Farms on the north side of Highway 58 near General Beale Road. There are also some pale bluish Gilia species mixed in.

As you descend from the White Wolf area down to the San Joaquin Valley floor, there are some sweeping expanses of Common Fiddleneck. From a distance people sometimes confuse these for poppies, but fiddleneck color is more golden than orange, and the flower heads are much smaller, so the color effect is more diffuse.

We're only at about five and one-half inches of precipitation so far this season -- about half of our historical average of just under 12 inches. And our chances for moisture this year are getting fewer all the time. December was great, but January and February have been a dry disappointment.

March is the last month for much moisture in the annual Southern California weather year. Longtime residents will remember the state's much-lauded "March Miracle" in 1991, when an otherwise dry year was salvaged by a few big storms that produced a wet March.

In Lake Tahoe, for example, it started snowing on March 1, and there was a total of 50 inches of snow that month. Fresno averages about the same annual precipitation as Tehachapi, 11.75 inches, and Fresno got seven inches of rain during the March Miracle of 1991.

Tehachapi wasn't quite as lucky, but we did get 5.83 inches of precipitation that March -- mostly rain and a little snow. The storms hadn't been predicted much in advance, and took meteorologists by surprise. California water users (oh, that would be every single one of us, wouldn't it?) were delighted.

It happened again in 1995 when we got even more March rain, with a total of 6.23 inches. The most recent wet March was in 2006, when we recorded 5.29 inches of rain. So a lot of rain in March is possible, just not likely, and unfortunately doesn't happen often. Still got my fingers crossed for this year though. Hope springs eternal.

If you can, you should choose a bright, sunny day without much wind, and take a wildflower drive down to lower elevations. If you take Highway 58 down to White Wolf and turn onto Highway 223 toward Arvin, you will encounter California Poppies, Common Fiddleneck, Popcorn Flowers, a couple of species of lupines, wild mustards and more.

Some of these are likely still descended from wildflower seed that was planted from airplanes after the Great Windstorm of 1977 blasted many of the hillsides totally bare of vegetation.

On the morning of Dec. 20, 1977, the northwest wind that had blown throughout the night picked up strength. People went to work and kids went to school in Bakersfield and Arvin, but by 9 a.m., schools were closing and parents were asked to come pick up their children because school officials were concerned that high profile school buses might blow over.

The winds got freakishly strong: Arvin recorded a high of 192 miles per hour, while Bakersfield recorded a gust of 189 miles an hour. Up in the mountain passes in the Tehachapis, the highest winds clocked in at an astonishing 199 miles per hour.

That storm caused tremendous damage, including five deaths, and it buried fences, roads and other objects in sand, while also stripping bare many exposed hillsides. Community leaders and civic boosters in the Arvin area raised funds and paid for aerial seeding of common wildflowers for a year or two afterwards, to help replace some of those that were lost when the soil seedbank was stripped away.

The wildflowers probably would have come back on their own eventually, but the aerial seeding helped speed the recovery process, and the areas on both sides of Highway 223 are awash in color during favorable years.

This isn't a bumper year for wildflowers, but there's definitely enough to make it worth driving down there, as my friends Toshimi and Les Kristof did recently, and Toshimi took the beautiful photos that accompany this story. Go check them out for yourself! 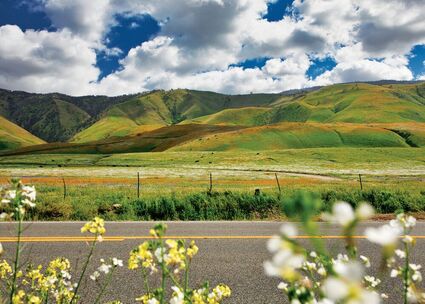 Both non-natives (like the wild mustard in the foreground) and native wildflowers are blooming now in the lowest elevations of the Tehachapi Mountains.