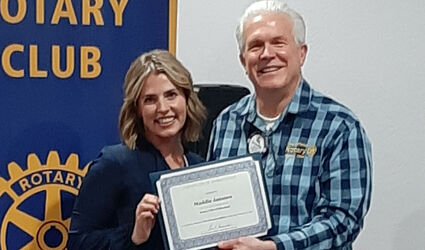 At their Feb. 17 meeting, Tehachapi Rotarians were treated to a talk by KGET Morning News Anchor Maddie Janssen. Janssen has been with KGET for 13 years and has been the morning anchor for 11 of those years.

Janssen, who lives in Tehachapi, said that it is still dark when she gets to the studio. She has 20 minutes to do her hair before broadcast time and completes her make-up between segments. She said you can see the progression if you watch the broadcast.

Janssen said she started college as a theater major at Chapman College but hated it, so hastily picked broadcast journalism which she also initially hated but eventually warmed up to it. She actually interned at KBAK before graduation and found she liked it there. Her first job was in Billings, Montana and she survived two years there but found she loved being a reporter. With a story she did on bone marrow transplants, she discovered she could make a difference. She really had a heart for community service.

She interviewed at KGET and was hired for weekends and sunrise editions but she loved that KGET raised hundred of thousand of dollars annually for the community and had a heart for their employees and the community. After being the noon anchor for a year and a half, she settled into being morning anchor. Janssen said she really liked that local news in Bakersfield is locally controlled and independent; and that they do not get any network pressure for content.

The Rotary Club of Tehachapi is a volunteer service organization with the motto "Service Above Self." The club meets on Thursdays at noon. For more information about Rotary Club, you can visit their Facebook page at http://www.facebook.com/RotaryClubofTehachapi/ or contact club President Paul Kaminski, (661) 699-5851.