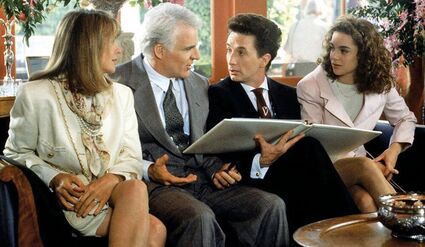 This month, for our wedding issue, I had the pleasure of watching "Father of the Bride" (1991). This is an early Nancy Meyers picture about George (Steve Martin) and Nina Banks (Diane Keaton) who are father and mother to 22-year-old Annie (Kimberly Williams), who comes back from Rome, engaged to Bryan MacKenzie (George Newbern). George begins as a curmudgeon who is not ready to see his little girl grow up and get married. Through the course of planning the wedding, George slowly begins to accept his little girl is a grown woman, and begins to see the situation from his daughter's perspective.

Early in the film, the father of the groom says, "Sooner or later you have to let your kids go and hope you brought them up right."

This is a coming of age film, not for the bride and groom but instead for the father. The father is being replaced as the most important man in his daughter's life. It's a journey many parents go through and not an easy one at that. My father in-law was brandishing a rifle when he got the news.

This film doesn't take advantage of the cast they've been given. Diane Keaton plays a fairly standard wife. Martin Short plays a wedding coordinator with an accent definitely not from this planet, but not particularly funny. You do however fall in love with Kimberly Williams as the bride. She is fun-loving and thoroughly enjoyable to have on screen. Finally, Steve Martin is skilled at making unlikable characters lovable. This is due to the slapstick shenanigans and situational gags that Martin is known for; but it's aided by the writing of Nancy Meyers. While not either of their best films, they do a serviceable job.

The film is a collaboration between then husband and wife duo Charles Shyer and Nancy Meyers. I feel more of Meyer's influence in the film. Even though the film is a remake of the 50s version, the dialogue has her recognizable playfulness you'd hear in her other films like "The Holiday" or "Something's Gotta' Give." While I enjoyed the film's opening monologue to the audience, I disliked the film's reliance on the narrated inner monologue of Martin's character. The modern audience will be more used to the "show not tell" model of storytelling and may find the redundant narration patronizing.

Other tidbits that I believe modern audiences will find odd: the idea of folks getting married at 22 instead of 32. The idea that a wedding could cost more than a house in Southern California. The idea that a picnic wedding would be a bad idea instead of a bundle of fun. Salesman visiting your workplace to sell you knockoff handbags, and on that thread, I was surprised just how materialistic the 90s was depicted in this film. How young and innocent we were before the '08 recession.

Overall, a D effort from an A+ cast gets a B-. This is no one's best film but a serviceable effort by all involved. They don't make low effort, easily digestible films like this today. So, if your dad needs a reality check about your upcoming wedding, I'd recommend a watch.