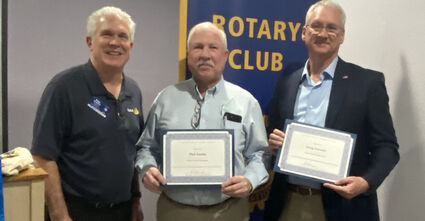 On Feb. 10, Tehachapi Mayor Phil Smith and City Manager Greg Garrett were guest speakers at the Rotary Club's weekly meeting. The Mayor spoke first, sharing about several improvement projects the city is working on. "Grant money isn't that easy to get," he said, "but we have a staff that is very dedicated." Thanks to their dedication, grants have funded several city improvement projects, including that of planting 400 trees in an effort to "re-oak" the valley, mitigate greenhouse gases and beautify Tehachapi for years to come. Another grant-funded project is to repave city streets, beginning with those of greatest necessity. Adding curbs and sidewalks where there are none is another ongoing project, funded a little at time but moving forward nonetheless. He mentioned that The Village Collective on Green Street - the former site of St. Vincent de Paul thrift shop - is "about a month away" from opening its doors.

When Greg Garrett spoke, he praised the city's balanced budget and overall financial health. "It's not an accident," he said. "We're conservative, we're planners." He went on to explain that even in the face of major setbacks, Tehachapi is thriving thanks to the skill and dedication of the finance team, recently joined by Finance Director Hamed Jones. Garrett elaborated on some of the obstacles faced by our city. "$6.5 million was taken from us by the state," he said. And remember that 51 cents per gallon gas tax that was supposed to fund asphalt on our roads? It was used for "other things," a misappropriation which Garrett denounced as "criminal."

But even with all the setbacks and challenges our city is faced with, a recent survey on http://www.LiveUpTehachapi.com showed that 75% of participants like the direction the city is going. "That's unheard of," said Garrett. He had a lot of positive things to report. "Crime is down 11% in one area and 17% in another," for example. Race Communications and Southern California Edison are working together to put new and existing utility poles underground wherever possible. Race, a public utility company, is working hard to "gigafy" the City of Tehachapi, offering their internet services to consumers in addition to Spectrum, and other providers.

At the end of the meeting, Rhonda Brady of the Rotary Club expressed thanks to the city for its support of their 12 Days of Christmas charitable event.