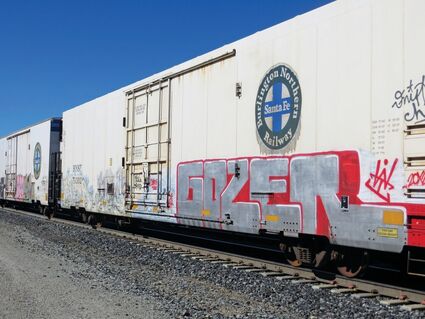 Flatcars were the first type of freight car used in America and date to the 1820s. Flatcars have remained fairly consistent in function: to carry freight that is too heavy, long, tall or wide for boxcars. Flatcar modifications in the 1940s brought about the truck trailer on a flatcar (TOFC) that can be as long as 85 feet. At that length, one can carry two trailers.

The freight car has undergone many changes during the 100-plus years of the Tehachapi Pass line. Boxcars, an American invention dating to the 1830s. Boxcars can carry a wide variety of crated or palletized freight, including paper, lumber, packaged goods, beverages and boxes

Freight cars or goods wagons, as they are called in Europe, are generally categorized as covered wagons or vans in the UK and are fully enclosed car with side or end doors. Standard boxcars have about three and a half times the capacity of a standard semi-trailer

Boxcars cost a little over $135,000 each and they have higher dwell times and lower turnovers than much more profitable large trains with similar equipment that go point to point without stopping.

Steel units have replaced wooden cars and the length of the cars has changed. Prior to WWII, the cars were in the 40-foot range while today they extend up to 65 feet with the double/triple stack auto-rack reaching 89 feet. The height of some freight cars became greater and boxcar roofs were raised.

Boxcar identifiers begin with the letter X. XM cars are used for general service. The XI is like the XM but is insulated. XARs and XMs have racks for loading autos and trucks. They are seen less often with the advent of the auto-rack car. The XAP is similar to the XAR but with racks for loading auto parts. XME, a wood lined XM used for general merchandise, has fixtures for securing the load. The XML car is a loader-equipped XM with elements for securing a load. XMP is an XM equipped to haul commodities other than autos and auto parts.

Today, trains in excess of 100 freight cars are common. If you are quick you can count the cars as they go by. However, it is easier to let the reporting detector do the work. The detector, broadcasting on citizen band radio frequencies, indicates the number of axles, usually four to a car. Dividing the axles by four will give a good idea of the number of cars.

Refrigerator cars, a modified version of the boxcar, are used for the transport of goods needing refrigeration and date back to the mid 1800s. Initially insulated with ice, over time mechanical refrigeration replaced the ice. These cars are often seen on the pass during the vegetable and fruit harvesting and packing season.

Once box cars were seen as mobile billboards, car owners began to place their names and logos in large designs along the sides of the cars. Letters usually represent the owner's name. BNSF, SP or UP may be easily recognized. However with over 4,100 unique letter combinations and 1.7 million cars traveling North American rails, it can be a challenge for a train watcher to know the names and logos of the many specific owners. They also provide a great place for taggers to practice their art. You can see this as they roll by.