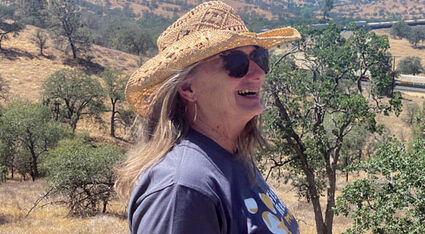 Christina (Tina) Fisher Cunningham was born June 1, 1944, just five days before D-day. Her folks, Peter and Sherry of the Seattle Fishers were stationed in Venice, California on civil defense. They brought my mother, Tina into this world in a Hollywood hospital.

On my last precious visit with her, I told her that if I had 1,000 lives to live, I would choose her to be my mother for every single one of them. This is because she had immeasurable personal power, wisdom and intellect that only grew with age. She loved being a woman and was grateful to have been born an American.

She raised me with the ideal that, "while I may not agree with what you are saying, I would fight to the death for your right to say it!" This is in stark contrast to today's spineless cancel-culture that she so reviled.

As a 50 year veteran journalist who covered a dozen winter and summer Olympics plus the Pan American games for Associated Press and Reuters, Mom reported with absolute journalistic integrity. I never knew her to tell a lie of any kind. She never let her personal views work their way into her reporting in any way. If mainstream journalism operated by my mother's standards, we would enjoy a much more elevated version of American democracy and a better world. Journalism to my mother was a sacred calling that she saw as necessary to preserve our republic and human freedom. Always fighting the clock, in her extensive travels she was famous for holding up full 747s for 30 minutes as she ran through the airports.

When she covered the Pan American games in Cuba, her communist minder tried to cut ahead of a long line queuing for ice cream. She insisted on waiting with the regular Cubans starting at the back of the line. Halfway through the hour-long wait, several Cubans, touched by her show of equality, offered their rare ice cream to her as a thank you for seeing them as equals when their own government did not.

Mom shrugged off the modern feminist movement and instead paved her own way and opted to prove her worth as a woman through her right actions, hard work and intellect while always rejecting any sort of entitlements or negative words against men. She worried that extreme feminism eroded what it actually truly means to be a woman.

She loved Tehachapi where, with loving devotion, she operated the local Kiwanis club. As a vital community service club, she wished that the local Kiwanian chapter will find a new life with new local leadership. That door remains open to dedicated folks who love their community: a new leader is welcome to step up and revive it.

Mom's patriotic streak was satisfied when, the day after her passing we had a celebration of life near Vandenberg Air Force Base. Clearly timed to match the start of Chinese New Year and the kick-off of the Beijing Olympic games, three massive sonic booms thundered through the cobalt blue sky (her favorite color). We felt it to be Mom's three-cannon salute. As the Space-X rocket escaped the atmosphere, the message was clear, "China, the contest for Mars is on!" And Mom knew that just like the race to beat the Russians to the moon, once again the United States, the power of democracy, individualism and freedom will deliver the goods.

She worked hard for years as a substitute teacher with at-risk students in Palmdale to pay for her beloved 60 acres of land in the Old West Ranch holdings. The land reminded her of her childhood home in Ellensburg. Our family will cherish the land for years to come.

Although open minded to all philosophies, she remained a devout Protestant and often shared small bits of scripture as life lessons.

She encouraged me to take massive risks on every level and to enjoy the outcome. At the age of 10, she let me take the bus into the city and sell 1984 Olympic pins. At 12, she let me work at sea in the San Diego fleet. She allowed me to buy a boat when I was 13, where I did laps around Catalina. She sent me to SCUBA camp at 13, which started my academic link to the sea. She sent me to Brazil at 14 to open my eyes to the world. She encouraged me to ride my Soft Tail Springer Harley across Europe at 25. One can only be a young man once on a Harley in Paris – she knew this and that experience remains the golden memory of my life.

Deeply in love, she married my larger-than-life, music-promoting Dad, Larry Goldblatt. They tied the knot in 1970 in Yugoslavia while he was managing Blood Sweat and Tears. Lead singer, David Clayton Thomas was their best man. The historic tour was the very first American rock band behind the iron curtain and as such played a role in thawing cold war tensions. The U.S. State Department held a gala dinner in D.C. to thank my parents and the band for their contribution of sharing American culture to those living under the heavy hand of the USSR.

Mom and I wrote a screenplay named "Zero Zero Three Magnetic," about a young Samoan gangster fleeing to Catalina who gets in touch with his island roots. These were the halcyon days when I had her all to myself – just two crazy Geminis pouring their creative hearts into the pages of a screenplay. In writing she taught me that less is more and to always allow the reader to feel smart by letting them draw the final conclusion.

Her favorite poet was Robert Burns who she read daily as a means of keeping in touch with her Scottish ancestry. Mom believed in the power of the individual. She often said if the individual is set free, as the founders of this great country did at the outset, we would all flourish without limitations. She believed that humans are born free and meant to stay that way and anything eroding man's innate freedom needs to be resisted. But she also knew freedom was meaningless without responsibility.

Mom took pride in our family who served with honor in the Revolution and every American war since. She made sure I knew the threats linked to "group think" and the dangers of a society without a truly free and honest press. Among her last words to me were to "never let 1984 come true." I will do my best. George Orwell was her favorite writer, she called him "the genius of the 20th century."

Mom liked different kinds of people, interesting people, people she could learn from.

She offered life-long council and was an advocate for all of my challenges and endeavors. Perhaps the greatest gift she gave me was never allowing me to consider myself a victim of anything. No matter what fate befell me at any time, no matter how harsh the circumstances, Mom made it clear that identifying as victim was never an option as nothing good comes of it.

For the past decade, her husband Greg gave my mom a long awaited sense of stability and tranquility. They loved each other intensely and were as happy as two people can be. Greg stood by her every second of every day of her fight with cancer.

Mom was eternally proud of her daughters, Laurel and Kelsey, who have raised amazing families and are truly good people.

No one can replace Tina Fisher Cunningham. But the reality is her energy was so strong, so pure, so powerful and so good that it lives on in those who knew her to such an extent – the feeling of loss almost seems misplaced. It just does not seem needed to miss what lives so strongly within us.

Mom you are forever a brilliant shining light. Fly high into the arms of the Almighty and may your soul go where it is needed most and enjoy your eternal travels across all that is. We all were better people for having known you and the world a better place for your time here.

[Editor's note: Tina Fisher (Forde) Cunningham was a contributing writer for The Loop newspaper since 2012. In her column The Forde Files, Tina focused on everything from City Council and School Board meetings to more controversial subjects like the High-speed Rail and water supply issues. She followed the long journey of Tehachapi's new hospital from concept to completion. The Loop staff will truly miss her wit and investigative resolve.]