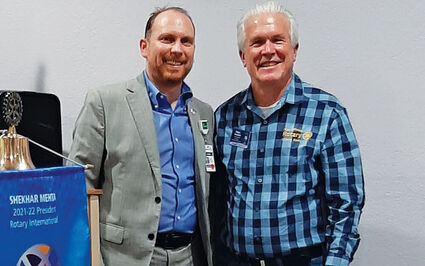 At their Jan. 6 meeting, Tehachapi Rotarians welcomed Daniel Wolcott, Adventist Health's President of Kern County Care Delivery. Wolcott oversees the operation of the three Kern County AH hospitals located in Bakersfield, Delano and Tehachapi. He came to Kern County from Adventist Health Lodi Memorial in San Joaquin County, where he had served since 2015.

Prior to returning to California, Wolcott served as president/CEO of Takoma Regional Hospital in Greeneville, Tenn. which is part of Adventist Health. During his tenure there the hospital was named one of America's Top Rural Hospitals by AARP Magazine.

Wolcott said he actually heads seven care units including the three hospitals and the four rural care clinics. Adventist Health Bakersfield is a tertiary care facility meaning it deals with highly specialized medical care, usually over an extended period of time that involves advanced and complex procedures and treatments by specialists.

Delano is the larger of the two remaining hospitals and includes a maternity community. Tehachapi, as a rural hospital, has received a Grade A. He added that the hold-up to the new imagery pavilion at Tehachapi is stalled until it can be surveyed by OSHPOD, which has recently become part of the state Department of Health Care Access and Information.

Wolcott said that Adventist Health is planning several partnerships in the near future, most notably with Kaiser Permanente who will be using AH Bakersfield as their care hospital. Another partnership is in the works with Kern Medical Center that has superb emergency care.

"Adventist Health has an aspiration statement to determine what the future will look like; a mission to determine long term health expectations," said Wolcott.