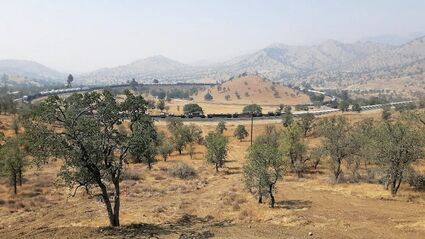 The Tehachapi Loop from the viewing platform.

In 1971 when the railroads gave up their passenger train routes to Amtrak, it blocked passenger trains on the route over the Tehachapi Pass. At the peak of railway travel it was used for passenger rail, but the routes they travel now are very limited due to poor profitability. Since then, only cargo trains have used the tracks. There are rare exceptions for the Coast Starlight and other Amtrak trains to use it when their main route is unavailable.

It is a relatively rare thing to watch trains cross over themselves. The new viewing platform, built, in 2021, by a joint effort of the Friends of the Tehachapi Depot and Kern County, along Woodford-Tehachapi Road is the safest place to view the Loop. Most railroad loops are much bigger and you don't see what you do at the Tehachapi Loop.

The railroad was built over Tehachapi Pass from Caliente to Mojave in 1876 and is considered an outstanding engineering feat. Contributors to the project's construction include Arthur De Wint Foote and the project's chief engineer, William Hood.

The track climbs 3,600 feet in 50 track miles from Bakersfield to Tehachapi using S curves back and forth up the Tehachapi Creek watershed.  At one point just above Keene, the engineer William Hood, built a large continuous curve which brought the track back over itself. This has become known as the Tehachapi Loop.

The siding on the loop is known as Walong after Southern Pacific District Roadmaster W. A. Long. A large white cross, "The Cross at the Loop," stands atop the hill in the center of the loop in memory of two Espee employees killed on May 12, 1989, in a train derailment in San Bernardino, Calif.

In 1955, a monument celebrated its designation as a California Historical Landmark, and in 1998 it was honored by the American Society of Civil Engineers as a National Civil Engineering Historic Landmark.

The Tehachapi Loop became the property of the Union Pacific in 1996, when it absorbed the Southern Pacific.  Trains of the BNSF Railway also use the loop under trackage rights.

The best viewing location is at the platform along Woodford-Tehachapi Road southeast of Keene or northwest of Old Towne Tehachapi. Seeing a daily average of almost 40 trains, the line is one of the busiest single-track mainlines in the world. With its frequent trains and spectacular scenery, the Tehachapi Loop is one of the prime railfan areas in the country.