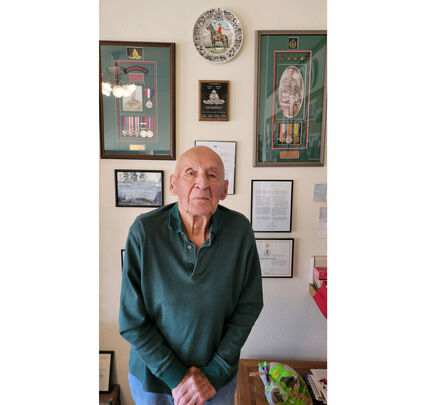 (Note: This is the thirtieth article in a continuing series about local military veterans and their service to our great country.)

In an unusual twist of sorts, David Patton ("Pat") Grier's fascinating story begins not in the United States, but in Canada, and with the Canadian Army in World War II. Many decades later, Pat and his family would settle in Tehachapi.

Pat was born in the town of Fort Macleod, Alberta, Canada, on Sept. 14, 1924. He came into the world with an illustrious lineage. His great-grandfather, an Irish immigrant, had crossed the Atlantic to Ontario. His grandfather, David Johnson Grier (known to his friends as "DJ"), served in the Northwest Mounted Police, his troop soon traveling west to Alberta and building a military fort (Fort Macleod) for protection against local Indian tribes.

In the 1870s, Grandfather Grier took the hand of a young Indian girl - "Molly Tailfeathers," the daughter of a local Indian chief - in marriage. He also became the first mayor of the new town of Fort Macleod, a posting he would hold for 12 years. During his tenure as mayor, much of town was burned to the ground by a terrible fire; in response, he ordered all wooden buildings eliminated on the town's main street and replaced with fire-resistant buildings of brick-and-stone. (To this day, the new brick/stone architecture along Main Street, Fort Macleod is considered so impressive that it has been filmed in several movies, including the most recent Ghostbusters film!)

Pat's father (Joseph Grier) fought with the Canadian Army in World War I. In France, he contracted tuberculosis and was sent to England to recover. While there, he met and married a "war bride" (Florence Haken) with whom he eventually returned to Fort Macleod. After the "War to End all Wars," Joseph enjoyed a career as an administrator for the Canadian Legion (their counterpart to our American Legion), while his wife - who had worked in a munitions factory during WWI - managed a household that grew to eight children (Pat was number six).

"I had a happy childhood," Pat reminisced. "I played hockey as a youngster - we all did in Canada! - and enjoyed dancing with the young ladies. A river, the Old Man River, ran right through the town, and we lived in a beautiful wooded area. As a youngster, I had a .22 caliber rifle and shot the gophers and magpies, which were scavenger birds. The farmers loved me for it, because the rodents would really rip up their fields."

Pat began high school in Fort Macleod and, time permitting, worked for the Canadian-Pacific Railway. "I worked in the railway's telegram office, reading telegrams to the orderly room at the local Air Force Base." However, he did not finish high school at this time (he would do so years later) and, on April 5, 1943, volunteered to serve in the Canadian Army. "In Canada, only the men who volunteered for service were sent overseas to fight, but that's what I wanted to do. I left to go overseas. It was the only time in my life I saw my father cry."

His basic training took place in the town of Camrose in central Alberta, from April to June 1943. Due to Pat's experience in the railway telegram office, he was then ordered to a base at Kingston, Ontario, for training in the Canadian Signal Corps. By serving in the signal corps, he was gladly following in an older brother's footsteps, who was already assigned to the signal corps in the United Kingdom. This training lasted an additional three or four months. Pat was then attached to an artillery unit at yet another training base, this one in northern Ontario, at the town of Petawawa.

Finally, in January 1944, he and his fellow soldiers boarded a transport (the "Empress of Britain," its name having been not so discreetly changed from the "Empress of Japan!") in Halifax and began the long, lonely journey across the Atlantic. "The transport," Pat recalled, "was an extremely fast ship, so we traveled alone, without a convoy [for protection against patrolling German U-boats]. I was seasick the entire way, and almost ready to jump overboard! We finally disembarked in Liverpool, England. We then took a train to an army base just south of London, where we underwent months of additional training."

One late spring morning, Pat and his barrack mates were abruptly awakened by the incessant drone of aircraft overhead - among them, hundreds of C-47 "Dakota" transports, blanketing the sky and shepherding thousands of Allied paratroopers toward Normandy, France. It was June 6, 1944, and the beginning of "The Longest Day," the D-Day invasion!

A short time later, it was Pat's turn. He shipped out in a convoy, which, at the end of June, arrived safely in Naples, Italy. A trained signal corps soldier with the rank of "Gunner" (equivalent to our Private First Class), he and the others in his unit were assigned as replacements to the 5th Canadian Armored Division, which was fighting alongside the 1st Canadian Infantry Division in the renowned English Eighth Army, which, in 1943, had defeated Field Marshal Erwin Rommel's Africa Corps in the North African campaign.

Commanded by Major-General Bert Hoffmeister, the 5th Canadian AD - known as the "Mighty Maroon Machine" due to the color of its shoulder patch - was locked in combat on the Adriatic side of the Italian peninsula, where it was up against a prepared German defensive position called the Gothic Line. Gunner Grier, assigned to his division's 8th Field (artillery) Regiment (Self-Propelled), reached the front lines in August 1944. Here, he served as a radio man in an M4 Sherman tank loaded with communications gear (because the comm gear required so much space, his tank was outfitted with a dummy gun made of wood).

Pat experienced his baptism of fire during the battle for Coriano Ridge in August/September 1944. As a signal corps soldier, he was not at the forward edge of battle, but did undergo some shelling from German artillery, including the infamous German 88 mm gun, a highly versatile weapon capable of destroying most any Allied armor at long ranges. "On one occasion," he said, "I saw one of our men, who was not that far from me, blown apart by a German artillery shell. That's when it struck me that I was in a war."

After breaching the Gothic Line, Gunner Grier's armored division continued its inexorable push up the Italian peninsula and, as Allied forces forced the Germans back, Pat would see additional combat action. In January 1945, the 5th Canadian AD left Italy and moved by truck, train, and naval transport to Belgium, where it was reequipped with new artillery pieces and tanks. From Belgium, the division advanced into Holland, liberating the town of Arnhem, which only months before, had been the site of a bitter Allied defeat. Although Pat's division was earmarked to continue its advance into Germany, the war ended (May 8, 1945) before it could do so.

Pat was one of the youngest men in his regiment, with less service time than the older veterans. Due to his lack of seniority he was sent to Germany on occupation duty. "I was quite unhappy about that," he said, evincing a trace of bitterness. "I wanted to go home." He was quartered in a former German military barrack and took part in searching local homes for weapons. "We went out at night. We had to deal with displaced persons [refugees] and liberated Russian prisoners-of-war, who were giving the locals a bad time. In other words, we operated as a kind of security force for local German civilians in our area."

Some months later, Pat finally returned to Canada with many thousands of soldiers aboard the Queen Elizabeth, one of the largest passenger liners ever built. Gunner Grier was discharged from military service on Feb. 22, 1946 - as noted on his discharge papers, which are meticulously framed along with other war memorabilia on his living room wall. His honorable military service earned him several awards and decorations: the 1939-45 Star, the Italy Star, the France and Germany Star, and the Canadian Volunteer Service Medal and Clasp.

Once again in civilian life, Pat took a job with a road surveying crew and later with the local post office. In 1949, he married Elizabeth "Betty" Obrey, and, in 1954, Pat, Betty and their rapidly growing family (their marriage would bring forth three girls and two boys) moved to sunny Southern California. In part, at least, to escape the harsh Canadian winters; Betty also had an older sister who lived in Burbank. The family would live for many years in Camarillo (Ventura County), with Pat, who earned his American citizenship in 1962, employed by American Airlines and working his way up to Passenger Service Manager. He retired in 1980. "I got tired of dealing with unappreciative customers!" 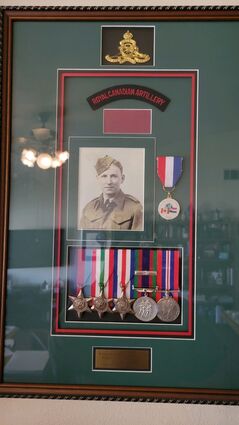 David Patton Grier's honorable military service earned him several awards and decorations: the 1939-45 Star, the Italy Star, the France and Germany Star, and the Canadian Volunteer Service Medal and Clasp.

About 25 years ago, Pat and Betty moved to Tehachapi. They had learned about Tehachapi from their daughter, Linda, a realtor who had purchased property in our town. "We went up to see Tehachapi and liked what we saw," Pat said.

Today, Pat, 97 years young, lives with his son, David, in a comfortable well-kept home. Betty passed away in late 2016. Every morning, David takes his dad on a mile-long walk. No doubt father and son have much to talk about, including the remarkable history of an amazing family!