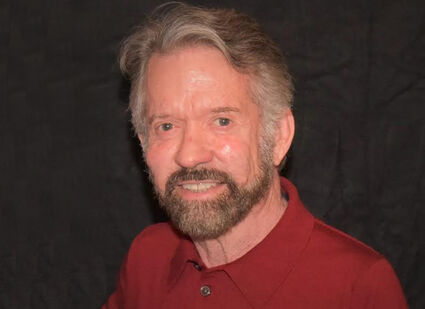 "A Faithful Friend is the Medicine of Life"

Charles White is another one of those people who make a tremendous difference wherever they go just by being who they are. His business skills are outstanding, his personal skills are excellent, and he is just so motivated in everything he does. You don't even have to know him personally to experience his gifts to our community. For instance, I like to walk. I often use the benches around town to rest while I'm on a walkabout. The other day I even met a tourist who was resting on a downtown bench. Charles White is responsible for getting those benches installed. His gifts to our community are numerous. Some even consider him one of Tehachapi's best kept secrets!

"We must find time to stop and thank the people who make a difference in our lives."

Charles White was born in Atlanta, Georgia. His father was in the military, so they moved often. As an adult he says he never really settled. He traveled extensively and lived in many different places in the states.

Charles found his path at an early age. He loved reading art books. He said he would check out arts and crafts books from the library and do the projects at home. Not surprisingly, he began college as an art major. Deciding that he didn't really have the discipline to stick with an abundance of art projects at the college level, however, he switched to art history. After university he was hired as an advertising director for a small chain of stores, which led to work in marketing. After a time, he began working as a consultant for museums. His career as an art and museum consultant involved a lot of travel. He worked in the United States, Canada, and China. He was hired for six months to manage a new museum in Atlanta, and later, transferred to Boston as the Regional Manager for the New England area. Because his company wanted to establish managers in different parts of the U.S., they offered Charles a promotion if he would move to California.

He eventually moved to Los Angeles and found himself liking it. He said he found L.A. to be a series of different communities.

"If you could find a community that was like your personality," he explained, "that was a good place to live. I found my little niche in Silver Lake. There were a lot of artists, unique businesses, and small restaurants in the area."

But then one weekend, Charles and a friend came to Tehachapi to visit his friend's parents. They loved the area immediately, and bought a condo. For the next four years, they would come up for the weekends. His friend was an audiologist and when Charles had to retire early because of his health, the friend opened a small office here and the two of them moved to Tehachapi full time in 2000. At first, they lived in Bear Valley, but Charles was doing so much volunteer work that the couple eventually moved into town.

Charles was always allowed to be himself growing up and says a big part of his life has been volunteer work. He got that from his parents. His father was a chef and always donated his time and service to community events. His mother was the neighborhood captain for March of Dimes, a PTA President, and a volunteer at a shelter for women. Charles learned at an early age that volunteering and helping other people was a good thing to do.

The first thing he got involved with in Tehachapi was tourism. He served on the city's planning commission and was chairperson for several years. He also joined Main Street Tehachapi at the time they were starting a mural program. The board asked Charles to head up the murals committee because of his experience with art and museums. He played a large role in selecting artists and locations for the many murals around town.

"I like working with nonprofits and find it interesting because you need organizational skills," Charles related. "Because I had worked in the corporate world, I was able to get things organized, enabling us to raise money and hire artists to do all the murals for the town. I was also on the Main Street Board. We did the downtown events. The city had sign grants, and Main Street Tehachapi helped us facilitate new signs for the businesses. For years other cities contacted Tehachapi to find out how they managed to have such beautiful signs."

In addition to the signs, they facilitated placing benches around town.

Charles also got involved with the Tehachapi Heritage League. After he attended several meetings, they asked him to be president. He has been president for sixteen years. The Heritage Museum has renovated the Errea House, and established the Milano Gallery which showcases the culture and history of the Native American Kawaiisu people.

When asked what advice he would give about life, Charles said, "The important thing is to not be too serious. Of course you have to be prudent with your health and financial issues, but things come and go and change. There aren't too many things you can count on in this world. When I was younger, I traveled widely, finding great pleasure in staying in various places and learning about them. I don't regret the things I have done; I just regret the things I didn't do when I had the chance."

Here is an exercise to reenforce the kindness and service that Charles White shares with others. There are three parts:

Decorate a note card and envelope. Kindness starts first at home. Write a letter to yourself. Stress kind things you can do for yourself and compliment yourself on things you have done for others. Mail the card to yourself.

Decorate another card and envelope and write a note to someone telling them of the difference they make in your life. Place the card in the mail.

Call someone on the telephone and let them know you are just calling to thank them for being so special.

"The Wisdom Keepers, Tehachapi Women of Substance and a Few Good Men" is a book in progress by Judith Campanaro, Tehachapi artist and resident. Judith's love of sharing inspirational stories of others prompted her to highlight amazing locals that make Tehachapi special. Each edition of The Loop newspaper will feature an excerpt from the book to give you a taste of our fabulous residents. The complete book will be published in late December/early January. If you would like a copy, please contact Judith at judithcampanaro@gmail.com. In the meantime if you'd like to recommend a local person for an interview send their name and number to Judith at judithcampanaro@gmail.com or (646) 896-4434. She will contact them.