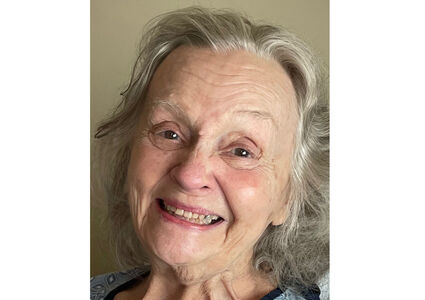 Bonnie Lynn O'Connor, 80, passed peacefully and gracefully on the morning of Dec. 30, 2021, in Tehachapi. She spent her final days surrounded by children, grandchildren, and great-grandchildren, under the expert care of Hoffman Hospice's Stephanie and Lisa.

Four score and seven months ago Bonnie burst onto the scene on an otherwise unremarkable Tuesday in Bridgeport, Conn. Her family remarked that she was both a frequent kick in the pants and an occasional pain in the butt, and not much changed over the following eight decades. She spent her early life in New England and quickly developed a love for people and animals. She gained a sister and partner in crime in Laurie at the age of five, and they had many adventures together over the years.

She fell in love with Marshall Farrington and before long had four kids. Bruce, Bonnie Lee, Marsha, and Melissa brought her so much joy, and the family enjoyed some great years together. In time, Bonnie and Mickey went their separate ways and Bonnie met William O'Connor. Soon enough, baby number five was on the way, and young Billy completed her collection of children.

A lifelong caregiver, Bonnie raised her kids and many animals. She became a nurse and impacted the lives of thousands of patients. She traveled the world, making friends everywhere she went. She left New England for a 20-year pitstop in California before finding herself madly in love with (and finally at home in) Alaska. Her 20 wonderful years in Alaska came to an end in 2020 as her health declined, and she spent the last year of her life with her granddaughter Jamie's family in Tehachapi.

She found great joy in mountains, trees, travel, Oreos, ice cream, Laurel and Hardy, The Birdcage, reading voraciously, spending time with loved ones, and olives and mushrooms. (Just kidding about the last two!)

She's also survived by her sister Laurie (Jay); nephews, John, and Shane; sisters-from-other-misters, Sjoeke (Rob), Char (Mike) and Susie; and niece and nephew, Jessika and Jake. She's remembered fondly by many of her children's friends (she unofficially adopted many) including Jennifer, Jeff and Gary, as well as many dozens of friends all around the world, and, of course, her rascally dog Ashook.

She was preceded in death by her loving parents William and Bernice and many adored pets including horses, Bo, and Katie; pony, Muffin; dogs, Padishah, Holly, and Mack; and cat, Sasha.

No services will be held now, but Celebrations of Life will be held in California and Alaska this spring. In lieu of flowers, please consider donations in her memory to Hoffman Hospice or the World Wildlife Fund.