HolidayLights at CALM named one of the 10 Best Zoo Light Shows in the U.S. by USA Today for third year 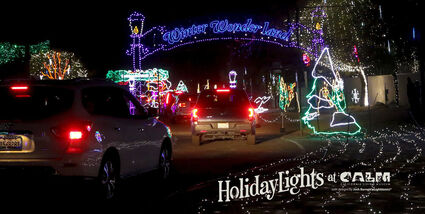 HolidayLights at CALM has been named one of the best zoo light shows in the U.S. by USA Today. After a month-long voting process wherein the public could vote for their favorite zoo light shows, HolidayLights finished in the ninth position out of 20 nominated zoos.

The top ten winners are as follows:

1. PNC Festival of Lights at the Cincinnati Zoo - Cincinnati.

2. Lights Before Christmas at the Toledo Zoo - Toledo.

The honor is the latest in numerous local and national accolades for HolidayLights. The event has also been voted best annual event by readers of The Bakersfield Californian and one of the top ten light shows in the western U.S. by the Los Angeles Times.

HolidayLights is designed and installed by Bakersfield resident Josh Barnett and his company Lightasmic!.