Fran Cook: A veteran looks back 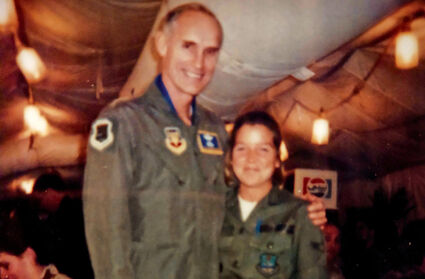 You may recognize Fran Cook, a local realtor with RE/MAX Tehachapi, a mom and community volunteer. But what you may not realize is that she is also a USAF veteran, having served in Operations Desert Shield and Desert Storm in 1990 and 1991. She turned 21 overseas.

Cook and her unit loaded a C-5 aircraft with all the gear they would need to set up a mobile hospital. When they finally departed, they flew into Goose Bay, Canada for a very quick layover, stopped in Germany for a couple of hours and then landed in Spain. Spain was a staging area to support operations in the Middle East. Cook said that when they finally arrived in Taif, it felt very surreal - like they were at Mojave Airport at night instead of half a world away.

Cook was an Airman First Class. Her job in the war was hospital administration: she admitted patients as they came to the mobile hospital where she was stationed. However, she "did whatever non-medical [duties were] needed," which included the paperwork, going on grocery restock runs, pulling security duty with her M-16, securing patient valuables, tidying up the place and whatever else needed to be done.

Before joining the military, Cook had learned to cut hair. During her off-duty hours in Taif, this somehow came up in conversation, and she ended up cutting some fellow soldiers' hair. Word spread quickly and soon guys were lining up for Cook to cut their hair, too. Eventually she found herself working all day at her job, then working all of her free time cutting hair. She began to charge for the service. "But they just kept on coming," she laughed.

She remembered one particular soldier, a patient at the mobile hospital who had suffered the bite of a camel spider. As he was recovering, he lamented that he needed a haircut. Of course, she offered to cut his hair for him. As they discussed his preferences, he told her he'd rather have slightly more hair than the "high and tight" style favored by the military. She described removing the blade attachment from the clippers and then getting caught up in her conversation with him. Forgetting that she had removed the attachment, she accidentally shaved a swath of the soldier's hair, exposing a patch of his scalp right in the middle of the back of his head. Fortunately, he didn't realize what she had done. She was cleverly able to talk him into a very short haircut and saved the embarrassment of having to explain what had happened.

When asked what were some of the highlights of her time in Taif, Cook smiled and said, "I played volleyball with Vice President [Dan] Quayle and I ate dinner with a 4-star general. He was the Secretary of the Air Force." Before sitting down to eat, Cook asked General McPeak if he would pose for a picture with her. But as they ate, it seemed to Cook that the opportunity had passed, for the general was engaged in conversation with others and once he had finished his meal, he stood up and headed for the exit. Suddenly he stopped and turned back to Cook. "Airman," he said, "you wanted to take a picture together." Ecstatic at not being forgotten, after all, Cook jumped up to comply. In the photo, her cheeks were full of food, but she was tickled that General McPeak had remembered and honored her request.

Cook described what the living conditions were like when she was stationed at the mobile hospital. The living space was basically just enough room for each soldier to have a narrow cot and a small space to access it. There were no closets to store their personal belongings until they begged a detachment of civil engineers to build some for them. The closets were very basic, she said, but very much appreciated.

The general infrastructure was lacking, especially when they first arrived and set up the hospital. There was sand everywhere, which was difficult to walk through. The civil engineers built a network of sidewalks to help mitigate the problem. But some inconveniences just had to be tolerated. For example, hot showers were not always available. "Sometimes you'd hop in the shower and it would turn cold. Then you'd either suck it up and finish your cold shower or get out and wait an hour for the hot water to hopefully be there," Cook said. "We very quickly lost our modesty," she remarked, laughing at the memory of insufficient privacy in the toilet and shower areas.

One great memory Cook shared was when it was all over and the personnel was reduced to a skeleton crew, including Cook, who was assigned the job of packing up the hospital gear. On one of those last days, a small group of Americans made an excursion to the Saudi city of Jeddah. From there they were able to spend a memorable and enjoyable day scuba diving in the Red Sea. It was a once in a lifetime opportunity, the memory of which Cook treasures to this day.

Cook shared the joy of receiving care packages from the States. She still has some of the cards and drawings sent to her and her fellow airmen from elementary school kids, showing support for the troops. She said that it was very moving to get these hand-drawn pictures from little kids thanking them for their service. But she became visibly emotional when describing what it was like to land on American soil, the first of two legs before coming home. She described entering a hangar full of American strangers on a guard base in Westover, Mass. where "people shouted, waved American flags and treated us like heroes," she said. "It felt so good to get that love and support from people we didn't even know." 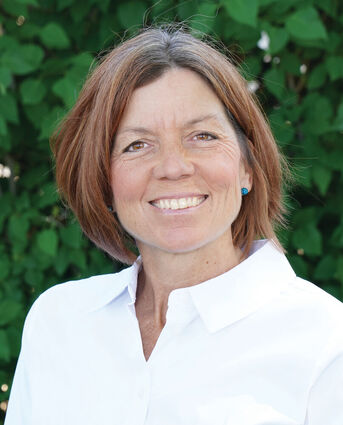 Thank you, Fran, for your service to your country!