Back in square nail days...those days of yore 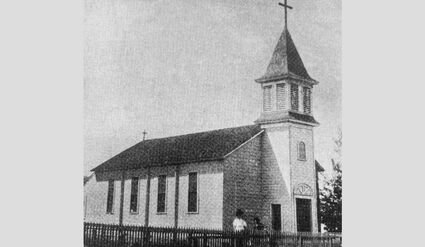 One hundred thirty-eight years ago there was a small frame building on West F Street. A frame church built with square nails and lumber with redwood pilings for the foundation. This was in the year 1884. Local parishioners were the construction crew and there was a bell in the bell tower that rang for the Sunday service. Travel being what it was in those days, it took the Bishop from the Los Angeles area a few years to arrange time to travel to the small mountain community to officially dedicate and designate it as a parish. As a result, the 1887 date has always been the date of the parish's beginning even though Mass was offered since 1884 . The bell is the only thing that survives of that structure. It is stored at the current building that presently welcomes those of the Catholic faith to Saint Malachy Church on Mill Street. I noticed in a local paper a few issues back that a photo of that first church had the date of its construction as being 1916. Not to worry; just subtract 32 more years and you have it correct: 1884.

History moving on will find a new church being built in 1936. Once again there was local and parish help but this time there was a real contractor, Vince Ninteman. Its first Mass was during Midnight Mass on December 25, 1936. It was in this "middle" church that St. Malachy had its Golden (fiftieth) Anniversary as a parish with Bishop Philip Scher celebrating the Solemn High Mass. It was an easy walk for most parishioners in the small town and the bell could be heard clearly along with the Congregational Church bell on E and Green streets.

St. Malachy's, needing a larger place of worship, was to relocate to the present Mill Street address in 1967.

As long as I'm writing about St. Malachy Church I'll add a few more details that I wrote back in 2015.

Those Days of Yore

In the early days of St. Malachy Catholic Church the pastor had a great area to cover. Actually, hundreds of miles were involved. Father Joseph Wanner was listed as Pastor of the Tehachapi Catholic Church from 1907 to 1908 but from 1908 until 1922 the parish was cared for from Needles, California. The boundaries from Needles included north to Bishop, south to the San Fernando Valley and west to Tehachapi. In the heat of the Needles' summers the priest, understandably, made Tehachapi his headquarters.

Transportation, in those early years in the Tehachapi Valley, consisted of horse and buggy or horse drawn wagons or just horseback. An occasional "gasoline buggy," as the early automobiles were sometimes called, were somewhat of a rarity. None of the downtown streets were yet paved and when a Model T Ford would get stuck in the muddy street, someone would jokingly call out, "Get a horse!"

The priest was able to hitch a ride on the freight trains that came through town and would be able to sit in the engine with the engineer and fireman and travel to his next parish. The name Patrick Greaney has survived through the years as one of the generous trainmen who offered this mode of travel. It is not known if the railway company knew of the arrangement.

One of the areas for Father Wanner's visits was the Tejon Rancheria on the west tip-end of the Tehachapi Mountains in the area of old Fort Tejon. The Fort had been closed for some years but the Rancheria and its residents remained. In order to travel to the old Indian ranch Father would ask longtime resident, Sam Iriart, to drive him by horse and wagon to the Perrier farm on the south side of Cummings Valley; this, being the area now called Stallion Springs. Since the Perrier farm was some fifteen miles from Tehachapi it took a good portion of the day to arrive, so Sam and Father Wanner spent the night with the Perrier family.

The next day, Father, Sam and sixteen-year-old Mary Perrier would ride horseback down Cedar Canyon Trail to the Tejon Rancheria. The trail was only passable by horse. Upon arrival, Father would set about baptizing babies, blessing graves, performing weddings and making contact with the Native Americans who lived in the village. It was a good visit.

They would return the same day and Father and Sam Iriart would spend another night at the farm. The third day would find them traveling back to the church in Tehachapi on F and Pauly Streets where Father would begin to plan his next visit in the large parish

The first St. Malachy Church was built in 1884 and designated a parish on June 13, 1887 by a now unknown bishop. It had a small living space in the rear of the stately frame structure where the clergy resided. It was furnished with a bed, table, stove and a candle for light.

Anton Pauly, for whom the street is named, donated the land upon which that first church was built. Old records show the Pauly name without an "e" as it is on the street signs.

To carry on a bit of history, the Perrier family would be involved in fate taking a hand and finding Mary Perrier marrying "the boy next door," Joe Banducci. The farm of Jane and Angelo Banducci was in the same end of the valley and soon Mary Perrier, daughter of Frank and Antonia Perrier, was wed to Joe Banducci. Since Mary was an only child the two ranches were to merge and become the Banducci Ranch.

The Banducci family, of Italian descent, came to Tehachapi with the Sasias, Antongiovanni and Bertania families. The children of these families were baptized by Father Wanner at the Cummings Valley School. The Antongiovanni and Bertania families moved on to Bakersfield, but the Sasias lived on to make their own history in the Tehachapi and Cummings Valleys.

The late Dorothy Banducci (Etchecopar) Perry and her brother, Chet Banducci were children of Mary and Joe Banducci. Now when driving on Banducci Road it may cease to be just a name of forgotten Tehachapi pioneers but people who lived and died, laughed and cried in the early days of Tehachapi.