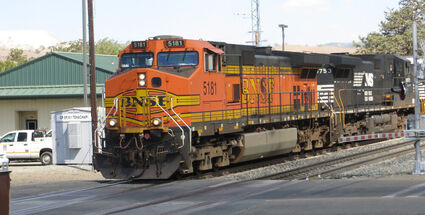 Toot, toot! Ever wondered about all those loud horn blasts as the trains come through Tehachapi? The four blasts as they approach an intersection or other series of toots before they move from a standstill? Those horn blasts are part of the General Code of Operating Rules for the railroad and are sounded for safety reasons. Whistles are sounded to attract attention to the train. They are also used as signals to railroad personnel and to the public or livestock on the tracks that a train is approaching.

Train horns are specifically designed to be a loud warning at railroad crossings to prevent accidents. Two longs, a short and a long indicates a train is approaching a public crossing. The signal starts no less than 15 seconds but not more than 20 seconds before reaching the crossing, but not more than a quarter mile in advance. The signal is repeated until the engine clears the crossing. The signal is also required to be sounded in California at all crossings public or private. The engineers retain the authority to vary this pattern as necessary for crossings in close proximity and are allowed to sound the horn in emergency situations.

Modern diesel locomotives primarily use a powerful air horn instead of a whistle as an audible warning device. However, the word whistle continues to be used by railroaders in referring to such signaling practices as "whistling off" as the sounding of the horn when a train gets underway.

The need for a whistle on a locomotive exists because trains move on fixed rails and thus are uniquely susceptible to collision. This susceptibility is exacerbated by a train's enormous weight and inertia, which make it difficult to stop quickly when encountering an obstacle. It acts as a means of warning others of the approach of a train from a distance as necessary. As train horns are inexpensive compared to other warning devices, the use of loud and distinct sounds became the preferred solution for railway operators.

There are people here in Tehachapi who object to the train horns and would like to have a quiet zone established here. Most who have moved here looking for our small town atmosphere object to the noise once they hear the horns. There have been those who have suggested walls along the tracks for sound abatement (like along some spots on the freeways) or digging a ditch 15 feet deep and putting the tracks below grade to reduce the noise.

Quiet zones are created in municipalities where citizens of the community complain of the noise pollution from the increasing number of trains which decreases their quality of life. In order to be approved for quiet zones, extensive safety and traffic studies must be conducted. Municipalities and the owners of the tracks must work together to ensure all federal regulations are being met. Quiet zones require improvements which would include installing standard or conventional automatic warning devices such as gates with lights, if not already installed. Medians must be installed at the railroad crossings to ensure vehicles do not proceed into the opposite lane to go around the gates. Once all safety measures are completed, train horns can be silenced at the railroad crossings.

But let's face it, trains have been traveling through Tehachapi since 1876, so unless you are over 145 years old, you moved into their territory.

Enjoy the sounds of Tehachapi.