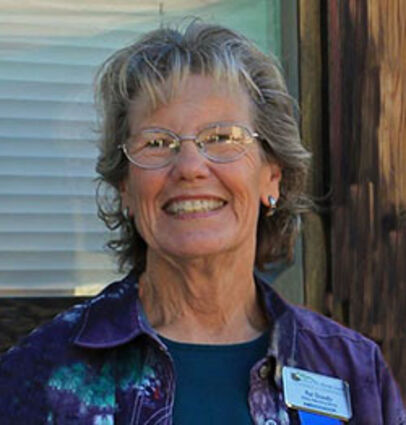 It was last April that Terry Albert moved to Tehachapi from Poway, a small town not unlike Tehachapi in northern San Diego County, where she had lived for about 20 years. Her life in Poway, much like her life here, was focused on her art and her four Icelandic horses. She had friends here and the lure of Bear Valley Springs and its active horse community were a real draw.

Terry was born in Texas but grew up in Long Beach, California. She said she always loved horses beginning with a collection of Breyer toy horses when she was young. She traced pictures of them from books. She studied art at Whittier College and after graduation became the Art Director for the Builders Emporium chain, a job she held for 10 years. After that she was West Coast Art Director for Pep Boys.

When Terry got married, she moved to Seattle and then back to California where she lived in San Diego. It was there in 1991 that she got her first horse, a Pony of America (POA) named Spice. She has had horses ever since. It was during a visit to a horse show in 2007 that she discovered and fell in love with the Icelandic breed. These small horses are hardy, long-lived and have a smooth riding gait. Although Terry now has four of them, only one, Ljonni, is her riding horse. Ari is 33 years old and retired, Gloi is a rescue and Star "just hangs out." Her dogs, a dachshund named Mollie and a sheltie named Pepper, and her cats are also rescues.

Terry started painting pet portraits in 1990. By the time she moved to Poway in 1998 she was participating in art shows and had a website. She has also written nine books about dogs and a show for Animal Planet. She said she now spends about 90% of her time painting. Terry said, for her, the biggest selling point of her new Tehachapi home was the room she now uses as a studio. She joined the Tehachapi Valley Arts Association and the Bear Valley Springs Cultural Arts Association. Her work can be seen at Gallery 'n' Gifts in downtown Tehachapi.

Welcome to Tehachapi, Terry Albert. We look forward to seeing you around town.

After living in Aurora, Colorado for 27 years, Alice Jeanson moved to Tehachapi in August to be closer to her sister who lives here. Alice said the original plan was for her to be the caretaker for their father but that changed when he passed away in February of 2021. She said this is the first time in 66 years that she has lived alone and it is a new experience. She hopes to eventually be joining her sister, Margaret, in Bear Valley Springs.

While living in Colorado, Alice worked in a dental laboratory. For 26 years she made denture models before transferring to the shipping department for her last year there before retiring.

Alice and her two sisters were born in Detroit. While Margaret now lives in Tehachapi, their other sister lives in Bend, Oregon. Alice married a computer technician who worked on medical equipment for Hewlett Packard. The company moved them first to California, then to Arizona and finally to Colorado. She has two grown children. Her daughter Christy lives in Woodland, Colorado and her son Paul lives in Denver. She also has two grown grandchildren who live in St. Augustine, Florida.

Alice enjoys sewing and gardening and she knows she will be able to do both here.

Welcome Alice. We know you will enjoy your new hometown.

If you have moved to Tehachapi within the last six months, Hilltop Welcoming Service has a bag of information about the Greater Tehachapi area, its activities, events, government and facilities. There are always a few coupons and gifts, as well. It is a great way to learn about your new community. Being part of this column is strictly optional. If you would like a visit from the Welcome Hostess, contact our office at (661) 822-8188.