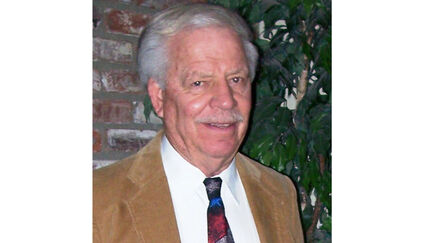 John McVay Stivers passed away peacefully at home on December 5, 2021, with loving family nearby. He was 87 years old.

John was born in Seattle, Washington on January 18, 1934, to "Mac" and Doris (Wert) Stivers. He was the oldest of three children. The family moved to California when John was very young and lived in Roscoe (Sun Valley) where he attended Roscoe Elementary School and Verdugo Hills High School.

John joined the Air Force in 1952 and spent a year in Korea during the Korean Conflict. He served on active duty in the Air Force for ten years. After his discharge from active duty, he joined the Air National Guard and served another 30 years until his retirement in 1992 with the rank of Master Sergeant. He lived in the Antelope Valley for many years and was employed with Los Angeles County Waterworks at the Lancaster office. He retired as Supervisor after 30 years of service with the Waterworks.

John had a love for old cars and was known for his large collection of classic cars, trucks, and assorted John Deere tractors. After moving to Tehachapi in 1999, he was active in the local car club and was instrumental in starting the Bear Valley Car Show which became a popular event during their annual Independence Day celebration.

John is survived by his wife, Linda; brother, Robert Stivers; sister, Ann Cumiskey; son, Lester Scott Stivers; and stepdaughters, Kerry Knight, and Kristy McEwen. He leaves many friends and family members to mourn his passing. We wish to thank Bristol Hospice for their loving care of John during his difficult journey.

A memorial service was held on December 17, at the Tehachapi First Baptist Church, 1049 S. Curry St., Tehachapi. Interment will be at the Bakersfield National Cemetery.