James Walker Crowe: From Guantanamo Bay to the War in Afghanistan 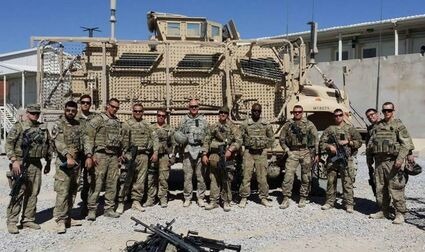 (Note: This is the twenty-eighth article in a continuing series about local military veterans and their service to our great country.)

James was born in Bakersfield on March 30, 1994, but grew up in the unincorporated area of Hart Flat, where his parents owned a five-acre property. His father, David, teaches history at Tehachapi High School; his mother, Lara, taught English at the high school and other locations through 2020. As a youngster, James worked for neighbors cleaning horse stalls, doing "weed whacking," and other odd jobs. "That's how I made enough money to purchase my first .22 caliber rifle – a Marlin bolt action rifle," he said.

All of James' education took place in Tehachapi, where he attended Tompkins Elementary School, Jacobsen Middle School, and Tehachapi High School (2008-12). In high school, he ran cross country and was on the track team; he also participated in AYSO soccer. While he loves the study of history, in high school he elected not to take his father's history class to avoid any appearance of favoritism (this author did not ask him to reveal his grades in history!).

James was attracted to military service at a young age. As he explained, "Joining the military was just something I always knew I was going to do. I saw myself as a soldier. I saw the recruiters. I liked the confidence they had, and I wanted to have that confidence myself."

Following high school graduation, he enlisted in the Army Reserves in May 2012 as a "31 Bravo" Military Policeman (MP). The Army sent James to Fort Leonard Wood, Missouri for nine weeks of basic combat training. "We all threw grenades, shot our M4 carbines, and went through the gas chambers to prove that our gas masks worked properly. I was the only person in my company who didn't gain or lose any weight during basic. I was 135 pounds soaking wet! I was the second youngest person in my company." After basic, he had 12 weeks of Advanced Individual Training (AIT), also at Ft. Leonard Wood, which James completed in March 2012. During AIT, he took several courses to learn his trade as a military policeman.

James had joined the Army Reserves with the intention of going to college. However, three weeks after his AIT, he unexpectedly received orders to mobilize with the 357th Military Police Company. As he recalled, "I was partially excited [by my orders], and partially annoyed, because now I was going to have to put my education on the back burner. But it all turned out for the better." He was sent first to Camp McGregor, New Mexico, then to Fort Bliss, Texas for additional military police and law enforcement training, which concluded in July 2012.

Private First Class Crowe then received a year assignment to the Guantanamo Bay detention camp, a U.S. military prison at Guantanamo Bay Naval Base in Cuba (the camp had been established in 2002, during the administration of George W. Bush, to incarcerate terrorists captured after the September 11, 2001 terror attacks). James' mission as a camp guard was to "maintain the safety and well-being of the detainees as well as my fellow MPs."

At Guantanamo Bay Naval Base, James and the other guards worked 12-hour shifts, doing a job that was stressful and always uncomfortable (albeit necessary). "I was a 19-year-old PFC walking the halls of the prison. It was my job to routinely check the prisoners to make sure that they weren't doing any harm to themselves, that they were eating properly, and so forth. I worked in the Behavioral Housing Unit, where we had some of the most mentally disturbed and violent detainees." As James noted candidly, "It was tough at first, but you grow used to it, and you grow from it. You're handling men whose sole purpose in life is to commit Jihad and to kill Americans. So it was a very taxing experience. These people hated me and would have loved nothing more than to have killed me, but I had to make sure they remained safe."

While at Guantanamo Bay, James was assigned to a barracks called Camp America. The living conditions there were surprisingly poor. He and his fellow guards were housed in a building made of corrugated steel, living in bunks eight to a room, with faulty air conditioning that offered little relief from the often intense heat. "The detainees actually had better living conditions than we did!" His duty at the prison ended in July 2014.

Hardly given time to process his experience at the prison camp, James was off to Afghanistan just a few weeks later (August 2014). He had volunteered for assignment to the United States Army Corps of Engineers (USACE) as a member of a small personal security detachment (PSD). The mission of the USACE in Afghanistan was, essentially, nation building – specifically, to build infrastructure that the fledgling Afghan government would need to survive and maintain order (e.g., military bases, police stations, hospitals, prisons). "Our job in the PSD," James stated, "was to take civilian contractors out to the sites where they were working and to provide them with protection."

He spent his first three months in Kandahar, moving about in an armor-protected vehicle that mounted a .30 caliber machine gun. He and his unit were then transferred to Kabul, where they served the final nine months of their tour. While the mission in Kabul was the same as in Kandahar, the terrain and the people were much different. "We went from a flat desert to a dense city of a million people. The smog in Kabul was terrible. The people there would burn tires to stay warm in the winter. I was stationed in an area called the North Kabul Compound [NKC], near the U.S. Embassy. The biggest threat in Kabul was from vehicular-borne improvised explosive devises [VBIEDs]. We were in light skinned vehicles, so we were lucky not to be hit by any VBIEDs, but we reacted to other vehicles that were hit. I've seen what a VBIED can do to a Land Cruiser and the people inside."

Afghanistan, of course, is a dirt poor, third-world country, a state of affairs that James and soldiers in his unit found more than a little depressing. Thus, they did what they could to help the hapless civilians of Kabul. "One of the better things we did was, we had all kinds of gifts and toys sent to NKC. Two days before Christmas 2014, we loaded up all the items into garbage bags and went on a dismounted patrol to a children's hospital, where they have a very high mortality rate. We distributed the toys to the children. We also did what we could to help homeless widows and orphans [as James explained, widowed women are shunned in Afghan society]. We would bring them water and MREs [Meals Ready to Eat]."

James' tour in Afghanistan ended in August 2015, and he returned home (his home now located in Tehachapi). Although still in the Army Reserve, he took a job with the Tehachapi-Cummings County Water District. Yet this only lasted for a short time and, in late 2015, he volunteered for a second deployment to Guantanamo Bay, this time with the 422nd MP Company. The mission was the same (prison guard at the detention camp), but, fortunately, his living conditions were much improved! This deployment also lasted for a full year. 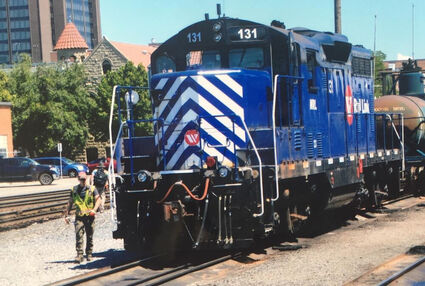 James as a locomotive engineer with the Montana Rail Link.

James left the Army Reserves in May 2018. His life had already taken a fascinating twist, as he gone to work for the Union Pacific Railroad in 2017. He was hired to work out of Green River, Wyoming ("I had wanted to move out of California, and this job gave me a good income with less taxes") and soon became federally qualified as a train conductor, only to be furloughed after eight months. He then took a position with Montana Rail Link in Missoula, Montana, and, in December 2020, was federally qualified as a locomotive engineer, which, as James said, is a step above being "just" a train conductor. "I really do enjoy what I do, except that we're on call all the time. We're moving freight, so I can be called at 0200 in the morning to come in to work. Freight never stops!"

James Walker Crowe – the town of Tehachapi and all of Kern County honors you, and thanks you, for your service to our country. And as someone who has always had a warm place in his heart for train travel, this author hopes that, perhaps one day, he will be able to ride the rails with you through the rugged (and breathtaking) Montana countryside!