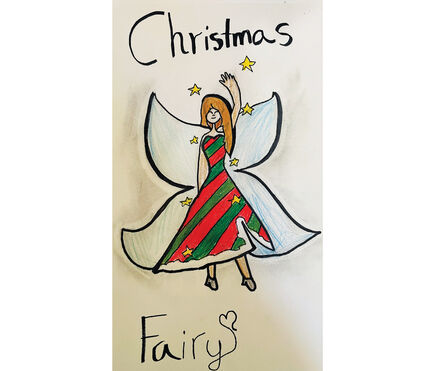 Every fairy is born with a special talent and each fairy must find their gift and their purpose. There are all kinds of fairies...flower fairies, water fairies, tinker fairies like Tinkerbell and snow fairies like Periwinkle.

Starlight was born in the Hollow amidst a flurry of snowflakes, which was quite rare. When taken to the fairy test, not one of the talents fit. The Queen said, "Do not worry. You will find it. Or it will find you!"

Starlight watched the remainder of winter snow through a frosted window. In February, Valentine hearts appeared. Leprechauns invaded and stayed the whole month of March, while the snow melted away. St. Patrick's Day was very festive with music and dancing. Then came Spring with flowers and decorated Easter eggs. The fairies prepared treats and the bunnies delivered them.

When it warmed into Summer, the heat made Starlight feel lazy. She sat in the shade of a giant tree and watched everyone else busy with their activities. She watched clear through Fall when leaves fell like rain in glorious colors. They were collected by some, and the rest swept away by blustery winds.

Those winds blew colder and colder and the air turned gray, as the fairies once again prepared for Winter snow. Only snow fairies can bear the cold of Winter. All other fairies must snuggle down in the warmth of their homes.

It was past mid-December when Starlight suddenly felt a burst of energy and could no longer sit still, quietly waiting. She had an intense desire to collect anything that sparkled while adding stray bits of fabric and colorful ribbons.

It came to her as a surprise, with the last twist and tweak, to see what was hanging on her tiny fairy hanger. A unique fairy dress that twinkled and sparkled every time she moved and shimmered at her each small breath.

As she stood before the mirror, the dress dropped over to cover her tiny body, she noticed her wings begin to glow a lovely warm light. Experimenting, she discovered cold air no longer chilled her, or damaged her wings. Cold air actually made them glow even brighter!

And as she flitted and flew through the cold night air, she felt stronger and more sure of herself than ever before.

It was at that moment the Christmas Star rose into the sky and showered bright light across Fairy Hollow. All the fairies, now huddled in their doorways, marveled at the sight of the Christmas Star as Christmas was ushered in by the first Christmas Fairy in 13 centuries!

As the snowflakes perfectly frosted the trees, the fairies came out of their homes, no longer too cold.

They started decorating their Hollow with every beautiful thing they could find.

And as the Christmas Star reached directly overhead, bells could be heard. Santa had found them at last!