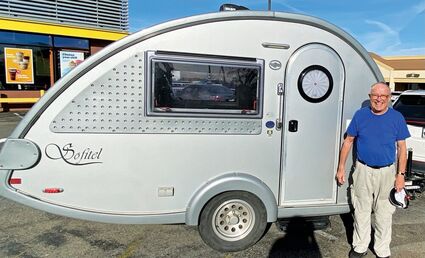 Deac Lancaster, just passing through Tehachapi with his tiny trailer.

I recently went through the McDonald's drive-thru near the corner of Valley Blvd. and Tucker Rd. in Tehachapi. As I emerged I saw a T@B Sofitel teardrop camper hitched to an ordinary car (not a truck), parked with the driver standing nearby, apparently stretching his legs. As a tiny house enthusiast and an admirer of all things mini, I was intrigued. I rolled down my window and called out to the man, "How do you like your little trailer?"

He didn't have to ask twice. I parked my car and walked over to the man who introduced himself as Deac Lancaster. I tried out the name, unsure I had heard it correctly. "It's short for Deacon," he said helpfully. He told me that he was on his way to the Salton Sea, an excursion that's part of a geology class he's taking. "I'm just passing through Tehachapi," he said, adding that he has a couple friends who live here (shout-out to Tehachapi residents Katie and Rebecca).

Once the introductions had been made, Deac opened the trailer door and let me step inside. He stood outside the door and pointed out the various features and innovations of his trailer. The couch folded out into a king size bed, which he assured me takes up the entire living space when opened. I stood right in the middle of the room (if you can call it that). At 5'8" tall, I was only an inch or two from bumping my head on the ceiling. If I had spread my arms out in any direction (which I didn't do), I could have touched any of the walls. It felt like a little cocoon. For such a tiny space however, Deac's trailer is surprisingly full of convenient features and appliances. There's a "wet bathroom" that just means you take a shower in the same space where the toilet is. There's a tiny little kitchen sink, a minuscule cutting board, a range with two burners, a flatscreen TV and of course plenty of outlets to charge smartphones and other devices. Deac said that it's supposed to accommodate two people, but he thinks that would be too cramped. For just himself, it's absolutely perfect.

Thanks for the tour, Deac! Safe travels to you.