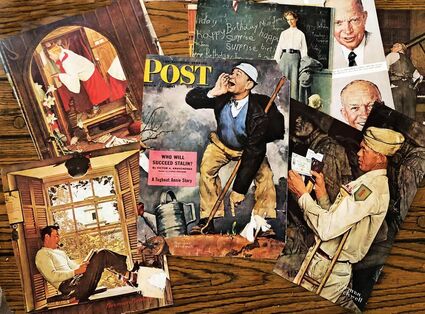 Some assorted covers that my grandmother cut off and saved, but ran out of pages to add to her scrapbook.

When I was a little boy, one of my favorite things to look at on my family's old Tehachapi farm was a faded scrapbook with an embossed eagle on the cover. I would open it up, and slowly turn page after page, studying the images. It was like a time machine into the earlier days of the 20th century, for it contained more than 100 of the magazine covers that Norman Rockwell painted for the Saturday Evening Post.

Like most of her contemporaries, my grandmother loved the work of Rockwell, and while she enjoyed the contents of the weekly magazine, I think the one of the main reasons that she subscribed to the Saturday Evening Post was to enjoy the covers that Rockwell painted.

When an issue of the magazine had a cover by Rockwell, my grandmother would wait until she and my grandfather had read it, then she would carefully cut off the cover and save it. More than 80 years ago, she started her scrapbook featuring his cover art.

Norman Rockwell began illustrating covers for the Post way back in 1916, when the 20th century was still young. He remained with the magazine through decades of transformation, turbulence and change until 1963, and he completed 321 covers in that time.

In his lifetime, some art critics were dismissive of Rockwell, calling him an illustrator rather than an artist. Rockwell was untroubled by this label, and he himself was content to describe himself as an illustrator.

If you examine his work closely, however, it is clear that he was an artist, and a great one. While many of his topics are light-hearted, frivolous and chosen for comic effect, others are poignant and deep. Some of my favorite covers depicted the quieter, more personal moments of American experience.

Rockwell portrayed people from all walks of life, and he often chose subject matter that other artists wouldn't have regarded as cover-worthy: a traveling salesman cooling off on a hot day with a dip in a roadside pond; a sailor home on leave, sleeping in a hammock with his dog laying on him; a wistful young girl looking at herself in mirror while holding a glamour magazine.

These were affectionate portraits of Rockwell's fellow Americans and their everyday lives, and readers of the Saturday Evening Post recognized themselves and their neighbors in his art. Rockwell did not focus on glamorous models or wealthy celebrities in exotic places. He used his brushes to capture a delivery truck driver, a schoolteacher, a babysitter, an old man who ran the newsstand.

Even as a little kid, I could sense the realism and the human emotion that Rockwell conveyed with his cast of characters. His subjects were often small town or rural residents, and I knew many Tehachapi people who looked like they walked right out of the pages of my grandmother's Norman Rockwell scrapbook. They dressed and talked and acted just like you would expect from the lives they led.

There were career bank managers who looked like, well, old bankers, as well as farmers, waitresses, teachers, cement plant workers, cowboys, barbers, a mortician or two, mailmen, nurses, football coaches and hometown Tehachapi kids, all of whom looked like the small town American people that they were.

And Tehachapi had many locations that could have been featured in a Rockwell cover. Places like Kelcy's Cafe, the original, somewhat rundownTehachapi Depot when there was still passenger train service, the old Monolith Store, Gil's Rock Shop on Tehachapi Boulevard. . . there were dozens of Tehachapi locations that looked like a Rockwell painting.

Among the misplaced criticism of Rockwell's work is the accusation that it is overly sentimental, but I don't see it. He portrayed people sympathetically, but also realistically. There is an undeniable affection that his characters typically seem to have for their lives and places, but I always found that totally relatable. I grew up in Tehachapi, and I dearly loved my hometown and so many of my fellow residents. I still do.

Sitting on the couch, holding my grandmother's big Saturday Evening Post scrapbook on my lap, I would inspect each cover, looking at the details in Rockwell's paintings. He was a master of detail, so there is much to notice. And I loved the fact that so often there would be pets or other animals in his paintings -- dogs, cats, a rabbit or bird. 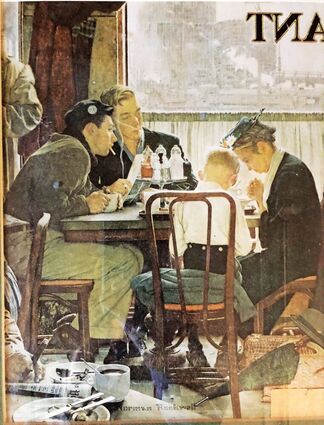 "Saying Grace" is a classic depicting a grandmother and her grandson on a trip, saying grace before their meal in a little diner.

Norman Rockwell portrayed 20th century Americana better than anyone else has or ever will. My grandmother and her era are long gone, but I still enjoy thinking of her and those earlier times in America, and in Tehachapi, and I like to turn the pages of the scrapbook she lovingly created. . .