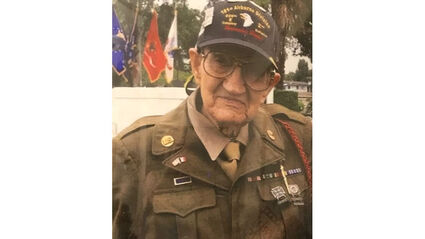 (Note: This is the twenty-seventh article in a continuing series about local military veterans and their service to our great country.)

Henry Leonard ("Len") Ochsner was born on February 3, 1923, in the township of Hellgate, Montana, at the western end of the Missoula Valley on the banks of the Clark Fork River. (As a historian, I cannot resist a fascinating historical note: "Members of the Bitterroot Salish [or Flathead] Native American tribe often traveled through the Missoula Valley on their way east to bison hunting grounds. As the Salish passed through the valley's narrow eastern and western mouths, members of the Blackfeet tribe would often attack and kill them." From the Hell Gate, Montana Wikipedia page.)

His parents were Henry and Charlotte Ochsner. Henry Sr., whose own father had emigrated to America from eastern Europe, served in the Army in World War I. In 1930, during the Great Depression, he sold his car to purchase groceries for his family; with no car, he walked to work. In the same year, he died of pneumonia. Little Henry was just seven years of age.

After her husband died, Charlotte remarried and the family moved to Oregon and, a short time later, to Seattle. But Charlotte's new husband soon abandoned her and her children (three girls and Henry); in desperation, she deposited the children at an orphanage, explaining that she would be back for them shortly. The children, with the girls separated from Henry, would remain at the orphanage for several years, until they were eventually reunited with their mother. While living in Seattle, Henry began high school but did not graduate. (In the late 1960s he completed his GED. As his daughter, Sandra Ahrens, recalled, "He was so proud, really so proud, to get his GED!")

Henry was drafted into the Army in 1942, and underwent basic training at a military camp just outside Seattle. Assigned to "Easy" Company," 506th Infantry Regiment, of the elite 101st Airborne Division (the "Screaming Eagles"), he accomplished his Advanced Infantry Training (AIT) after arriving in the United Kingdom. However, his hopes of becoming a glider pilot soon came to naught: His instructor was an alcoholic and, on Henry's very first flight, the glider crashed and its wings broke off! He decided to transfer to the paratroopers.

In the early morning hours of D-Day, June 6, 1944, 21-year-old Private Ochsner landed with his regiment near Utah Beach in Normandy, France, as part of Operation "Overlord." Due to heavy German anti-aircraft fire – and the inexperience of the American transport pilots – Henry and his fellow paratroopers missed their assigned landing zone and were scattered across the countryside behind enemy lines. Henry soon found himself in a makeshift unit slugging it out with German infantry concealed among the massive hedgerows that dominated the terrain. "I didn't think we were going to get out of there alive," he recalled many years later. "It was terrifying...there were Germans all around us [i.e., around him and several of his comrades]. And this woman took us in and put us up in the attic [of her home]. And we could hear the Germans talking down below, they were in her house. They were talking and we were up above them." It took the better part of two days for Henry to finally link up with Easy Company. (See "WWII 'Screaming Eagle' Vet Ochsner of Cal City dies," by Dennis Anderson, http://www.avpress.com, September 9, 2019; and Honor Flight Kern County's Facebook page.)

Private Ochsner and the men of the 101st Airborne Division fought their way through the Normandy hedgerows and across France. On September 17, 1944, the paratroopers of the 101st jumped into Holland during Operation "Market Garden" – an attempt by British Field Marshal Bernard Montgomery to seize bridgeheads across the Rhine River barrier in a coup d'main and end the war in Europe in 1944. The attempt ended in disaster, as Allied airborne forces were met by fierce and unexpected resistance, particularly from the armor and infantry of two German SS tank divisions, which, unknown to Allied intelligence, were recuperating and refitting in the areas selected for the airborne and glider landings.

After more than a week of tenacious combat during Market Garden, Henry and his elite comrades continued their role in the liberation of Holland. In December 1944, the 101st was again in the thick of the action – this time defending the Belgian city of Bastogne against furious German attacks in the Battle of the Bulge. Easy Company and the rest of the 506th Infantry Regiment held out despite a paucity of winter clothing and insufficient rations and ammunition. At one point during the siege of Bastogne, Henry was unable to start a Jeep in the arctic cold. Suddenly, a French boy bolted out of a building and warned Henry to get away from the Jeep! He managed to jump away from the vehicle just as a shell from a German 88 mm gun tore into it, leaving a piece of shrapnel lodged in his boot and a small shrapnel wound ("just a scratch") that he was able to dress himself. How, or why, the young boy knew to warn Henry will remain forever a mystery.

By April 1945, the 101st was in the Rhineland. As the division made its way through Southern Germany, it liberated a concentration camp near the town of Hurlach (in the so-called Kaufering camp complex) where prisoners with typhus had been sent to die. There, a horrific scene awaited Private Ochsner and Easy Company: more than 500 dead inmates. In fact, as Henry told his daughter Sandra, "the bodies were stacked like cords of wood." The Army ordered the local townspeople to bury the dead.

The war in Europe ended on May 8, 1945. Days later, the 101st Airborne Division received orders to occupy Berchtesgaden, the location of Hitler's "Eagle's Nest" high atop the Bavarian Alps. Entering the Kehlsteinhaus, or Eagle's Nest, the "Screaming Eagles" found items that included destroyed paintings, evening gowns, medical equipment and, most significantly, of course, Hitler's wine cellar! Photographs and newsreel footage show soldiers of the 101st taking in the breathtaking vistas from the "Führer's" famed mountain retreat and, more importantly it seems, devouring Hitler's private collection of cognac and wine. The soldiers' drinking binge is still considered one of the most expensive in history.

For his sterling military service, Private Henry Leonard Ochsner would garner decorations that included the French Croix de Guerre, the Belgian Fourragere, the Presidential Unit Citation and the European-African-Middle Eastern (EAME) Campaign Medal with four battle stars. (Decades later, in September 2017, Henry would be awarded the National Order of the Legion of Honor [Légion d'Honneur] from the French Consul General in Los Angeles, Christophe Lemoine, in a ceremony at Los Angeles National Cemetery. While not rare, the honor is the highest that France bestows on both its own citizens and foreign nationals.)

The war having come to an end, Henry did a short stint with the Merchant Marine. In 1947, he married Violet Jenson, a union that would bring forth four children (all girls). The marriage would last for 72 wonderful years; indeed, as Sandra told this author, "I never saw my parents fight. It was a perfect marriage."

During the 1950s, Henry found employment as a long-haul truck driver . . . until that day – the day a very young Sandra saw a driver step out of a truck and asked her mother, "Is that my dad?" It wasn't, but Violet relayed their daughter's remarks to Henry, and "that's when he said, 'I'm done. If my own children don't recognize me, it's time to do something else.'"

In 1961, the family moved to the Los Angeles area after living in the Pacific Northwest and in South Dakota for a while. Henry began a long and successful career in the aerospace industry, including working for Hughes Aircraft; Violet was also employed by Hughes. As Sandra remembered, her father was also "quite the entrepreneur. Dad knew how to make money. He was really good at it. He would recycle computer paper and other items – such as wire, cardboard and metals – from dumpsters and resell them for lots of money."

He also took up a serious hobby in his 30s and 40s – country music. He sang and played guitar in "honky-tonks." According to Sandra, he sounded like Ernest Tubb, a celebrated singer/songwriter and one of the pioneers of country music. Backstage on occasion, he even "shot the bull" and picked a little guitar with the likes of country greats Buck Owens and Merle Haggard. Saturday nights must have been "swingin'" in the Ochsner household!

In 1991, following both their retirements, Henry and Violet took up residence in California City. Meanwhile, their four daughters had grown up and moved on with their own lives; a granddaughter was born in 1988 (Ashley), and another in 1995 (Tamara). As for Henry, he took up a new hobby, building model trains ("one entire bedroom was a model train set"). He also loved to do volunteer work, in particular to support local food banks. "He would drive all day to pick up the food," Sandra said. "He had been hungry once, during the Depression, and he vowed that no one should go hungry again."

In May 2011, Henry visited Washington, D.C. as a guest of Honor Flight Kern County. "Until he got back from the Honor Flight, he'd never talk about the war," Sandra said. "When we children asked, 'What did you do in the war, Dad?' He would say, 'We liberated quite a few bottles of wine!' After the Honor Flight, that changed and he opened up more." Two years later, he made the "pilgrimage" to Normandy to celebrate the 70th Anniversary of D-Day.

Henry died peacefully at his home in California City on September 7, 2019, of complications from cancer and old age. He was 96. Violet, his devoted wife of more than seven decades, passed away in January 2021.

(Note: The 2001 HBO miniseries "Band of Brothers" tells the story of Henry's Easy Company of the 101st Airborne Division from its training through the end of World War II. As Henry noted, the depiction was "pretty close," although he admitted that there are some things in war that one simply cannot duplicate.)