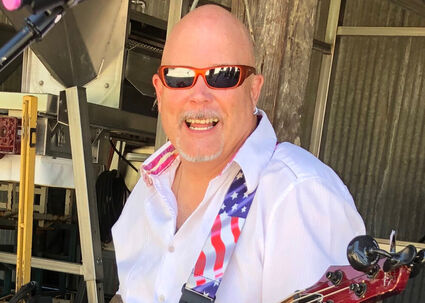 I recently met up with Rob Saranpa at Kamenz Kafe (formerly The Coffee Mill) to talk about his children's book, The Night Jesus Met Santa Claus. To look at him, Saranpa looks more like a tattooed rock musician than a children's book author. In fact, he is both.

Before converting to Christianity, Saranpa's resume would have read something like, "touring rock musician, biker bar bouncer and collector for drug dealers." When he became a single dad, sole custodian of his ten-month-old son, that was the first "inkling" he had that he wanted to change. His first wife had made it clear that if she was going to date him, he would have to attend church. One day, as he was "listening to some music, cleaning [his] back porch ... looking back at the things God" had done for him, he had the overwhelming realization that, "wow! God is real!" When I asked him to describe that moment, he said simply, "It was humbling."

In the late 80s and early 90s, Saranpa was a fairly well-known musician in the San Fernando Valley, playing all over the L.A. area and even coming to Tehachapi to play at the The Summit and Tehachapi Golf Course. He "ended up playing all over the world, mostly entertaining our troops on USO tours and stuff like that."

The Polar Express movie hit theaters during the 2004 holiday season. Saranpa had watched it and was struck by the disquieting idea that "they worship Santa" in that movie. Christmas is "supposed to be about the birth of Christ," he said. He was greatly concerned about how our culture slowly turned the historical St. Nicolas into an omniscient individual, who is treated with worshipful reverence in The Polar Express and other movies - someone that children can petition for all their desires.

In 2006, Saranpa was selected by Mountain Bible Church as a bass player on an international worship team and went to Indonesia. One day, Pastor Marv asked him to write a Christmas song. Saranpa was daunted and thought doubtfully, "Man, that's some pretty heavy theology. I've only been a Christian for a year and half."

But one day, as he was driving down the hill to work in Bakersfield, he had an idea. He wondered what would happen if Jesus and Santa were to meet. He imagined Santa coming down a chimney and finding himself face to face with Jesus. It was such a powerful thought, Saranpa immediately pulled over and scribbled 90% of the song lyrics on the only thing he had available: his Safe One Bank statement. When he got to work (where he was "the boss") he told everyone not to play any music. He wanted to be free to develop the song that was forming in his head. Once the chords were written down, he went to see Pastor Marv who made the comment, "I can imagine Randy Travis singing this song" - prescient words.

Saranpa played his newly composed song on Christmas Eve for a social gathering. It moved some people to tears. Saranpa went outside at one point, where a preschool teacher was taking in the night air. She told him that his song should be a children's book. "I consider myself more of a composer than an author," he told me, but admitted that God was in charge, not him. "I knew that if God wanted to bless this thing, then he would bless it." Saranpa embarked on an odyssey of experiences with various publishers and record labels. In the end, Randy Travis's brother Ricky Traywick recorded a beautiful country rendition of the song and the book was published.

"This has never been about money," Saranpa asserted. "This is about introducing kids to Jesus through Santa," who they're already familiar with. In fact his current publisher has admonished him for allowing his premium content to be accessed on YouTube, free of charge. But Saranpa insists that people should be allowed to see it because the message is too important to limit in that way. He said, "I'd rather lay up my treasures in Heaven."

In 2022, Saranpa will be working with Trinity Broadcasting Network (TBN) to promote and publish his book, an exciting new development that anticipates unprecedented distribution of his heartwarming book. The Night Jesus Met Santa Claus is available on Saranpa's Shopify page: nohawkmusic.myshopify.com/products/the-night-jesus-met-santa-claus. You can find the song on YouTube by searching "Ricky Traywick Jesus Santa." On Dec. 16 at 3:30 p.m., you can meet Rob Saranpa at Tehachapi Christian Store, 108 E Tehachapi Blvd., where you can purchase the book (for $25) and he will gladly sign it for you.