Bobcat: a quiet predator that blends into the landscape 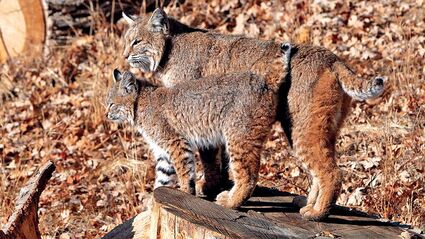 A mother Bobcat and her kitten, which is probably about five months old, sun themselves on a recent autumn morning.

On a warm, sun-drenched autumn morning in the Tehachapi Mountains, a tawny predator jumps up from the ground and lands silently on a tree stump, surveying the muted landscape of dried grasses and oak leaves faded to the color of manila rope.

With keen hearing and eyes that are better able to detect movement than humans can, the Bobcat is superbly adapted to hunting, and this one was alert for any sign of prey.

As she scans her surroundings for movement, the Bobcat hears a rustling in the leaves and tenses her powerful leg muscles, ready to leap if necessary. A much smaller creature gradually moves closer. Suddenly it appears on the stump, right next to the lethal predator. The Bobcat barely reacts, however, for the intruder is. . . her own kitten, learning from its mother how to hunt and move subtly and quietly through a landscape. Together they stand on the tree stump in the sunlight, the kitten brushing up against its attentive mother.

This scene took place on a recent Tehachapi day, when Elizabeth Caffey was out at the Golden Hills Nature Park, where she frequently goes walking and birding. While she was walking on the Tom Sawyer Loop trail, Elizabeth was fortunate enough to observe the Bobcat mother and its kitten. Elizabeth was photographing birds, so she had a camera with her.

"They sat on the tree in the sunshine and were grooming," Elizabeth explains. "I was probably about 40 feet away. The mother kept an eye on me, but they seemed pretty comfortable and were still there on the hill when I left. I was careful not to approach them and just took the photos from where I was standing when they came, and then I left slowly." Elizabeth graciously shared her images, and they accompany this column.

Bobcats are one of the most common and widespread predators in the Tehachapi Mountains, since they are very adaptable and are exceptional hunters, able to catch all kinds of prey, from small mammals to birds, reptiles, even fish and insects.

Their favorite prey, however, is lagomorphs, the mammalian order that includes rabbits, hares and pikas. In the Tehachapi Mountains, lagomorph species include Audubon's Cottontail, Black-tailed Jackrabbit and Brush Rabbit, which is a species of small cottontail typically found in chaparral environments.

Bobcats also regularly take Botta's Pocket Gophers and California Ground Squirrels. They occasionally prey on chickens and other barnyard fowl, as I can attest to firsthand, having lost a number of chickens and a couple of turkeys to a Bobcat. I actually saw a Bobcat running away with one of my hens in its mouth, so its culpability was not in question. Although the old tropes mostly warn about a fox in the henhouse, it is Raccoons and Bobcats that are the two main predator threats to your chicken flock in the Tehachapi Mountains.

Bobcats occasionally prey on deer if easier prey is scarce, but since a Bobcat typically only weighs about 20 pounds, it is a challenge for them to tackle prey as large as a deer, and injuries can result.

While canines like Gray Wolves, Coyotes and Gray Foxes typically have the assistance of both parents in raising young, the mothers in most feline species go it alone, and this is the case with Bobcats. After mating, the female selects a den site, usually in a small rock shelter within a boulder pile.

If a location like this is not available, the mother Bobcat will also utilize the trunk cavity of a large hollow log. Litter size can vary, but in our area, litters of two or three seem most common.

Mothers usually give birth in April or May, but a second litter is sometimes produced in September. Breeding times vary widely though, so Bobcats can be born any month of the year.

When they reach three months or older, Bobcat kittens can start accompanying their mother when she hunts. This helps them acquire vital experience, for the biggest threat to young Bobcats once they leave their mother is starvation. Predators like Coyotes, Golden Eagles and even adult male Bobcats may kill young Bobcats, but failing to find enough to eat is typically the greatest hazard facing them.

The Nuwä (Kawaiisu or Southern Paiute) word for Bobcat is tüküütsi, pronounced tuh-kuhts, and was sometimes used as a Native name or nickname for tribal members. The late Tom Scott was a Nuwä man known as Tüküüts.

Like the mother Bobcat and her kitten that Elizabeth photographed, there are many other Bobcats living quiet lives in the Tehachapi Mountains, unseen except by those who are observant, unobtrusive or lucky -- or all three. 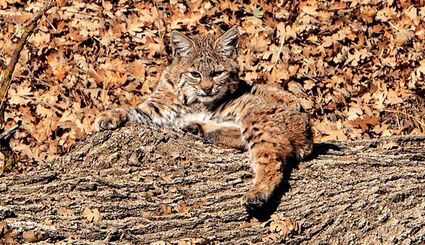 A Bobcat kitten sitting on a cottonwood log. Its cryptic coloration enables the young cat to blend in with its surroundings.