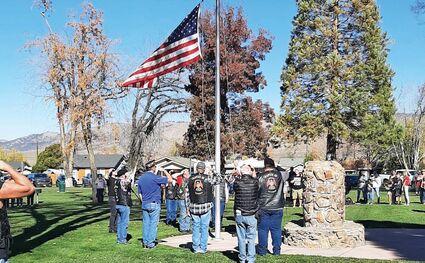 At 11 a.m. on Nov. 11 members of the American Legion and Legion Riders raised the American flag in Philip Marx Central Park. The eleventh day of the eleventh month in 1918 was the day and time of the signing of the armistice ending World War I. It was renamed veterans Day in 1954 and honors the veterans of all branches of the military.

veterans groups set up booths throughout the park, a model encampment was set up and a mini-boot camp was available for kids to try their skills.

The veteran-run 5150 Dieselz organization announced they have taken over the planning for Wreaths Across America in Tehachapi, which will take place on Dec. 18. The group will be laying wreaths at Westside Cemetery at 9 a.m and then moving to Eastside Cemetery. Wreaths will be placed at the monuments in Freedom Plaza at 6 p.m. that evening.