Falk read, "Our nation embodies the freedoms of its citizens. veterans know this better than most. We commend the brave soldiers, sailors, Marines and airmen who have answered the call to protect and serve. They have protected our democracy and way of life, and they boldly travel the globe to liberate and protect the freedoms of others. The noble duty to defend family at home and freedom abroad is uniquely American, and we are so proud of our veterans."

The letter closed with, "To all veterans here today, you are my heroes. From the bottom of my heart, thank you for your service to this great nation and to the families that stand by your side. May God bless each of you and continue to bless America."

State Senator Shannon Grove sent a letter to be read at the ceremony, as she was participating in a ceremony elsewhere in her district. Part of her letter read, "There is great courage within all those who have taken an oath and made it their duty to protect our country from enemies, both foreign and domestic. Their commitment to the American Dream has never wavered, just as our support for these heroes must never diminish.

"As a veteran I had the privilege and honor to serve in the United States Army and witness the fall of the Berlin Wall. As the wall shattered, I saw hope restored for many as their freedom was reinstated, once again. The freedom secured by our country's veterans that we enjoy today should never be ignored.

"It is an incredible honor to serve as the first female veteran elected to the California Legislature and to stand up for our veterans who have defended our freedoms and the constitution of the United States of America."

Kern County Second District Supervisor Zack Scrivner addressed the group of Mojave citizens in person. He said, "We are here to honor, and to celebrate, and to commemorate all the brave men and women who have ever served in the United States Armed Forces and devoted their lives, and sacrificed so much, in defense of our great nation.

"We must never take this freedom, nor the veterans who defend it, for granted," Scrivner said. "As proud citizens of the United States of America, it is our duty to forever show our respect, appreciation and gratitude to all those who are serving, and have served, in the Armed Forces. The men and women of the United States military exemplify all that is great in our country. Thanks to the courage, loyalty, dedication and service of our veterans, America will always remain a beacon for freedom and justice throughout the world."

Mojave Chamber of Commerce President, Ted Hodgkinson remembered many of Mojave's veterans who are no longer living, including Grant Frye, U.S. Navy; Ray Murphy, U.S. Navy and Richard Willie. He recounted stories of veterans of World War I, World War II and Vietnam.

Keynote speaker, Leon Ryder is a native Californian and Vietnam veteran. He is a retired junior high school teacher with the Mojave Unified School District and served the district for thirty-one years, teaching science, math and computer science.

Ryder attended the College of the Sequoias in Visalia, California with an Associate's Degree in Science followed by completion of his Bachelor's Degree, majoring in Mathematics, at Fresno State College (now called CSU Fresno). He completed his teaching credentials at CSU Bakersfield, after returning home from service with the U.S. Army.

He served in the U.S. Army 8th Radio Research Field Station in Phu Bai, South Vietnam. While at the 8th RRFS, he received a promotion to Sergeant and was awarded the Bronze Star and the Army Commendation Medal. Returning home from Vietnam he served out the completion of his enlistment assigned to the US Army Security Agency Test and Evaluation Center at Fort Huachuca Arizona.

Leon Ryder came from a family who have always served America in the military. He gave an emotional talk about his experiences. His grandfather was a Mule Skinner with the artillery in World War I, his Great Uncle was a pilot in a spotter plane in Korea, his father served in World War II and Korea. During World War II his father served with the artillery protecting the troops who were building the China Burma Road. His brother was a Navy Corpsman who served with the U.S. Marines in Vietnam, in the mid 1960s. "My brother was in DaNang, a strange coincidence, I was stationed 50 miles away, years later, in Phu Bai."

"Our quarters weren't so good, it was an old French base, a double-wide trailer, four people bunking together or when it got busy, we double bunked, had eight people."

Ryder related stories about his service in Vietnam. He was a non-combatant, but had conversations with many men who were in combat.

"When they came home, they were never the same," said Leon Ryder. "War is not nice, I hope my grandchildren never have to worry about war."

"One of the strangest things I thought, we had a perimeter around our base with guard towers and we had to guard it," said Ryder. "We could not fire at anybody when they were in the open field outside of our perimeter. It didn't matter who came by, we couldn't fire, even if they were taking shots at us."

Ryder reiterated several times the frustration with the rules of engagement and how war is not nice and it is not fun. He concluded with his concerns about how important it is for America to be prepared to defend our freedoms.

Taps was played by Matt Nelson, c Mojave Air & Space Port operations manager on a trumpet borrowed from a local Mojave resident. Don't think there was a dry eye in the park. 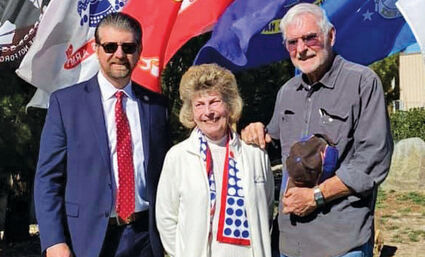 Homemade cookies and donuts from Stoken Donuts & Deli were enjoyed after the ceremony.