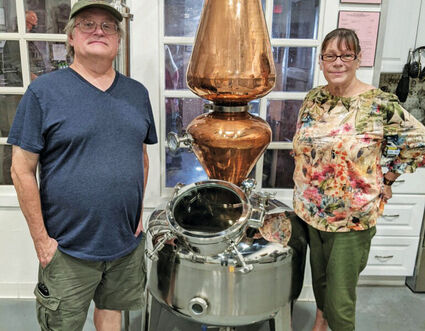 Mark and Sharon Fisher at Devils Creek Distillery with a very pretty still.

Driving through Mojave for the past several months, you might have seen the billboard at the south end of town that says "BOURBON" in huge letters. This sign is for the Devils Creek Distillery in Mammoth Lakes. As we'd drive by I would usually say, "I'd like to go there, sometime."

Well, back in September, Sharon dragged me there for my birthday. It's a kind of tradition that she takes me someplace different each year, like the Steinbeck House in Salinas or the Forestiere Underground Gardens in Fresno. This year, she had us drive to Mammoth Lakes where we went to the Devils Creek Distillery.

The distillery is a small place located in an industrial park on the south side of Mammoth Lakes. Which is kind of like Local Craft Beer (LCB) here in Tehachapi. They have a small tasting room inside the front door with the stills and aging barrels in the back. It's a family operation and we were greeted by the mother of the distiller, who helped us taste their products – bourbon, rye and rum, at the time we were there.

We took a short tour (well, it had to be short, the place was small) and were told about the operation. We were shown the barrels aging in the back. Bourbon has to age for at least two years in new barrels; they typically age for 24 to 36 months. The rule about having to use new barrels has encouraged them to develop a relationship with a barrel maker back in Kentucky or Tennessee (I can't remember which). The barrel makers are from a Scottish scotch-making family. And, since scotch is supposed to be aged in used barrels, the barrel makers buy them back and send them to Scotland.

We also got to hear about how they used their still to take expiring beer and other alcoholic beverages and distilled them down to make hand sanitizer at the beginning of the pandemic. They then provided the hand sanitizer back to the restaurants, etc., that had provided the original beverages, helping to keep things operating smoothly.

So, if you're looking for a (very long) day trip and have an interest in bourbon, consider a trip up to Mammoth Lakes and the Devils Creek Distillery, 123 Commerce Drive, B8 Mammoth Lakes, California.

We did and we came back with a nice bottle of their award winning bourbon.