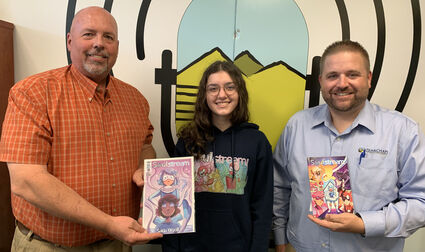 Saida Woolf, a 17-year-old Tehachapi resident, has completed her "Soulstream" comic book series and it has been combined into a 132-page book published by Simon & Schuster.

Saida shares the journey of writing and creating all the art for her fantasy superhero comic book on TehachaPod. She talks about her experiences working with Scout Comics, who helped her through the writing. Woolf will be appearing at the Errea House Museum, 311 N. Green Street, in Downtown Tehachapi on Saturday, Nov. 6 from noon to 4 p.m. She will be on hand to autograph copies of her book and take photos with her Soulstream.

Soulstream has been referred to as, "a magical adventure for all ages."

TehachaPod breaks down how the In-N-Out recruitment video came together and what the goals of it were. Almost as soon as the video was published it took off, going viral in the coming days. The video did reach the In-N-Out executives and more than half a million people on the City of Tehachapi's social media platforms.

The TehachaPod crew also talks about other activities and events that are coming up in the Tehachapi area. They got a chance to talk to Caltrans District 9 about the upcoming winter season and how they plan to push information out to the public.

California Highway Patrol Officer Aaron Maurer from the Mojave Station came in to TehachaPod to talk about the renewed focus on speeders and seatbelt enforcement in East Kern County.

Officer Maurer talked about an increase in fatal car accidents in our area that can be attributed to unsafe speeds and lack of wearing seatbelts. He said these accidents involve local residents who get complacent while driving and do some unsafe things.

Maurer said if drivers could show a little more patience when driving and give themselves a few extra minutes, it would make it safer for everyone. We also talked to him about driving near school busses, emergency vehicles, winter driving, child car seat restraining devices, distracted driving and other programs the CHP sponsors.

The award winning TehachaPod is available on all podcasting platforms free of charge and is the official podcast for the City of Tehachapi. TehachaPod features Greg Garrett (City Manager), Corey Costelloe (Economic Development Coordinator) and Key Budge (Community Engagement Specialist) as the hosts.

Find a link on our website http://www.LiveUpTehachapi.com. Direct any questions, comments or show ideas to Media@TehachapiCityHall.com