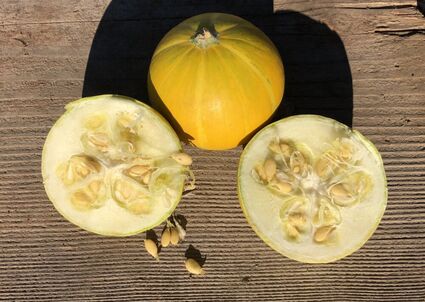 There is a remarkable native plant that can be found growing mostly unnoticed in the Tehachapi Mountains. It has several unusual qualities, and once you are aware of these, you are unlikely to forget it.

It is known most commonly in our area as Coyote Gourd (Cucurbita foetidissima), though it has acquired numerous aliases. Among these are buffalo gourd, calabazilla, wild gourd, fetid gourd, chilicote, prairie gourd, wild pumpkin and more. The Mountain Lion is the animal credited with more different names than any other creature; I nominate the Coyote Gourd as the plant with the most nicknames.

Coyote Gourd is a perennial plant that produces long trailing vines with triangular-shaped, gray-green leaves. In favorable growing conditions, a single Coyote Gourd can produce a sprawling plant that's 20 to 30 feet in diameter.

Coyote Gourds like sunny locations with sandy or loamy soil. They are often found growing in what botanists sometimes describe as "waste places," which always struck me as an unnecessarily pejorative term for little portions of the Earth that humans were at least temporarily ignoring.

These so-called waste place locations tend to be alongside roads, in vacant lots, sandy washes, fallow fields, old equipment storage yards, near railroad tracks, etc. Coyote Gourds will become established in a place like that, and then continue to grow there for years. And years.

There is a patch of Coyote Gourds that grow each year along the north side of Valley Boulevard, just east of Griffin Street (a place the oldtimers referred to as "Griffin Hollow"). I can literally never recall a time when I didn't see them growing there, and my memories go back more than 50 years now.

Their species name, foetidissima, is pronounced fet-uh-DISS-ih-muh, and it means "very bad-smelling." As in fetid. And indeed, if you crush the leaves or stems, you will quickly discover a pungent, bitter onion-like smell. This unpleasant stench is only produced when the plant is bruised or injured, so it likely serves to discourage herbivory – the consumption of its leaves by wildlife.

After the golden blossoms are successfully pollinated by insects, Coyote Gourds produce fruit that look like small dark green pumpkins, with light green lengthwise stripes and striations. These mature and harden into bright yellow gourds, about three to four inches across. These softball-sized gourds are nearly perfectly round, and typically numerous.

During the growing season, Coyote Gourd plants are seldom noticed, growing in among the introduced Mediterranean grasses, long dried out and faded to a straw color in the hot summer sun. The Coyote Gourd leaves conceal the gourds themselves, whose green color enables them to blend in.

At the end of the season, however, the gourds have ripened to bright yellow, and then a killing frost causes the foliage to completely wither and dry. What's left behind is a dozen or two of the gourds scattered on the ground, and passersby see the sunny golden orbs and wonder, "Where the heck did those suddenly come from?"

People have asked me over the years "What are those wild gourds good for?" and the answer is, in some respects, "Not much." At least not for eating or for making utensils, because while hard, the gourd skins are very thin and would break with even slight usage. These are sometimes used in art projects and for decorative purposes.

However, despite being bitter and even poisonous to eat, the gourds contain quite a bit of saponin, which are bitter and typically toxic plant chemicals that produce foam and suds when agitated in water.

The Nuwä (Kawaiisu or Southern Paiute) people of the Tehachapi Mountains called Coyote Gourds by the name sogonaavü, pronounced so-go-NAH-vuh, and traditionally would break the dried gourd shells into pieces and use them as laundry soap.

Other tribes throughout the West and Southwest where Coyote Gourds grow would use certain parts of the plant as medicine or food. There has been interest in growing Coyote Gourds commercially for the seeds, which are rich in oil – it has been claimed that they could potentially produce more oil per acre than corn, without being irrigated.

Coyote Gourds are able to grow and thrive year after year under arid conditions, and this is largely due to their incredible root. Though it is entirely invisible from above ground, Coyote Gourds can produce enormous tuberous roots that can be 18 inches across, extend down more than eight feet underground and weigh more than 150 pounds. There has been research interest in using the carbohydrates in these giant roots for producing biodiesel. Oddly, the big root often branches into two descending roots, so if you dig it up, it resembles the waist and legs of a buried root person. 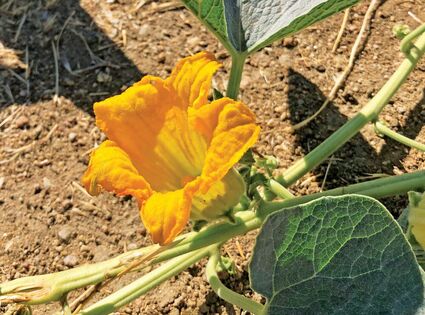 The trumpet-shaped golden flowers resemble those of other members of the squash family.

Coyote Gourds are unusual plants that have lived in the Tehachapi Mountains for countless thousands of years. With their hardy qualities, they are likely to be here for many thousands more. . .