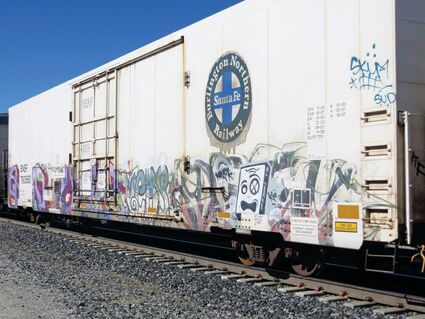 The freight car has undergone many changes during the one 100-plus years of the Tehachapi Pass line.

Steel units have replaced wooden cars and the length of the cars has changed. Prior to World War II, the cars were in the 40-foot range while today they extend up to 65 feet, with the double/triple stack auto-rack reaching 89 feet. Also the height of some freight cars became greater when boxcar roofs were raised. When it became popular to haul containers on flat cars, the beds of the cars were lowered. This also facilitated the double stacking of containers.

Today, trains in excess of 100 freight cars are common. If you are quick, you can count the cars as they go by; however, it is easier to let the reporting detector do the work. The detector, broadcasting on citizen band (CB) radio frequencies, indicates the number of axles, usually four to a car. Dividing the axles by four will give a good idea of the number of cars.

Boxcars – An American invention that dates to the 1830s. Note that boxcar identifiers begin with the letter "X."

Refrigerator cars – A modified version of the boxcar, used for the transport of goods needing to be kept cool or refrigerated, dates to the mid 1800s. Initially insulated with ice, over time mechanical refrigeration replaced the ice. These cars are often seen on the Pass during the vegetable and fruit harvesting and packing season.

Once freight cars were seen as mobile billboards, car owners began to place their name and/or logo in large designs along the sides of freight cars. Letters usually represent the owner's name. BNSF, SP or UP may be easily recognized. However with over 4,100 unique letter combinations and 1.7 million cars traveling North American rails, it can be a challenge for a train watcher to know the names and logos of the many specific owners. They also provide a great place for taggers to practice their art; you can see this as they roll by.