Profile of an Honor Flight recipient 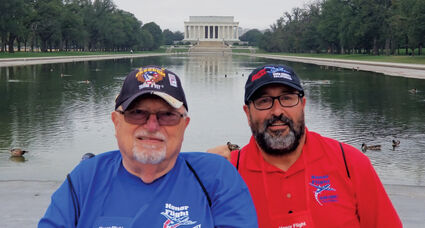 Bill Kritlow and guardian, Neil in Washington with the Lincoln Memorial in the background.

Early in October, local Bear Valley Springs veteran, William (Bill) Kritlow, flew on the 2021 Honor Flight from Kern County to Washington, D.C. The flight departed from Meadows Field in Bakersfield and flew to Baltimore International Airport. Each veteran is provided a guardian. Neil from Bakersfield was Bill's exemplary guardian.

As the plane taxied toward take-off, a fire engine sprayed a huge arc of water over them in a show of respect. In Baltimore, the same thing happened. Bill commented that the organizers seemed to take every opportunity to honor the vets, including a dinner at the end where each veteran was called up and the Master of Ceremony reviewed their years of service.

The sightseeing tour of Washington was filled with wonderful highlights. The first one Bill mentioned was the WWII memorial; a wall filled with stars designates each warrior who was lost in the war. The Vietnam Memorial, of course, was special.

District representative, Kevin McCarthy, was at the Vietnam Memorial to greet them. At the depiction of the planting of the flag at Iwo Jima, as one circled the memorial, it appeared the flag was being raised. The Korean Memorial depicted 100 soldiers in battle dress marching toward you. His aunt who was in the service, was instrumental in organizing a memorial for women who have served in our military. They also visited the fort in Baltimore where the Star Spangled Banner was written and is memorialized.

The veterans stayed at the Sheraton across the street from the Pentagon. That Sheraton was damaged in the 9/11 attack on the Pentagon.

Bill and wife, Patricia, built their first house in Bear Valley Springs in 2004, and came as weekenders for the first seven years. They moved here from Fountain Valley, Orange County in 2011. The house was high up on El Rancho Dr. in Bear Valley Springs, but they have since moved down the hill for better access to health care. They have been married almost 41 years. Bill sold insurance before retirement. He is a prolific writer and has seventeen books published,

All in all, he felt it was a wonderful trip and a huge honor to be on this flight. If you wish to contribute to the Honor Flight cause, Jon Reppert of Bear Valley Springs, who lives at 29240 Fawn Way, collects cans and bottles for recycling. The money he makes on these items goes to many different causes, including the Honor Flight, Wounded Warriors, and many more organizations.