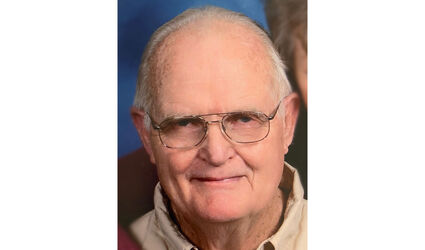 Dale Atkinson, 82, passed peacefully at home surrounded by family on Monday, Oct. 25. A Celebration of Life will be held on Saturday, Nov. 13, at 1 p.m., St. Jude's in the Mountain Anglican Church, 1200 S. Curry St., Tehachapi.

Dale was born to Leota and Harold Atkinson in Hotchkiss, Colorado on January 18, 1939. He graduated from Nucla High School in Colorado. During his time in high school, he was an outstanding athlete, playing many sports. He was scouted by the New York Yankees in 1957 as a catcher but due to an ankle injury, his baseball career was abruptly cut short. Dale then pursued his lifelong career in Aeronautics at Northrop University.

He married the love of his life, Carol Lawson on Feb. 14, 1959. The family moved to Stow, Massachusetts where they raised their four sons, David, Timothy, Michael and Joseph. Dale worked for Atkins and Merrill in Massachusetts for 18 years and then moved to California where he worked at Northrop Grumman until his retirement in 2000. He was involved in many projects, and was most proud of the success of the B-2 Bomber.

Dale enjoyed traveling in their RV to many destinations. He loved woodworking and family ancestry.

He was preceded in death by his parents; his brothers, William and Richard; and his son, Timothy.

Donations may be made to the National Multiple Sclerosis Society.