Andy Selga at Tomb of the Unknown Soldier.

(Note: This is the 26th article in a continuing series about local military veterans and their service to our great country.)

Andy Selga was born on Aug. 15, 1994, in Lancaster, Calif. His father (Frank) has worked for Southern California Gas company for more than 30 years, his expertise is in the field of cathodic protection (that is, keeping underground pipes and other submerged equipment from rusting or degrading in any way). His mother, Joan, was a stay-at-home mom until her boys – she also has an older son, Ryan – were through high school; she then took a position as a physical education teacher's aide in the Tehachapi Unified School District.

Both Andy and Ryan grew up in Tehachapi. Andy's mother home schooled him from second through eighth grade, an activity facilitated by lesson plans from Valley Oaks Charter School. He later attended Tehachapi High School where he played football his freshman and sophomore years. "I came to learn pretty quick that I wasn't really cut out for football." He was on the swim team for all four years, serving as captain of the team in his junior and senior years. While in high school, Andy was also "very proud" to serve as co-commissioner of "spirit and rallies." "We would host and MC events for the high school. I really enjoyed that; it gave me more confidence dealing with people and reduced my fear of public speaking."

Andy applied for college at Weber State University, Utah, but, as matters turned out, he didn't really feel ready for college. Meanwhile, Andy's brother Ryan was already serving in the Navy, "So, I decided to join the military myself. But, of course I needed to join a better branch of the military!" Barely 17 years of age, Andy went to an Army Recruiting Office in Bakersfield, where his parents signed a waiver to allow him to serve (the legal age to enlist without the waiver is 18).

In August 2012, Andy was off to basic training at Fort Benning, Georgia. Basic, as Andy recalled, was a "real wake-up call for me. You become an adult very quickly when you're being screamed at by combat veterans of Afghanistan. But I liked the structure [the military] gave me, and I actually enjoyed my basic training."

At Ft. Benning, in addition to basic training, Andy also completed his advanced individual training, making him, in the idiom of the Army, an "11B Infantryman." "There is a deep-rooted pride in the infantry in the Army," Andy averred, "which acknowledges the infantryman's uniqueness with a blue chord worn around the shoulder."

In December 2012, he was assigned to the 3rd Infantry Regiment at Fort Myer, Virginia, adjacent to the Arlington National Cemetery. The 3rd Infantry Regiment, officially known as the "Old Guard," is the oldest regiment in the United States Army. Andy served initially in the regiment as part of a light machine gun crew. However, the regiment also embraced several specialty platoons, including the Tomb of the Unknown Soldier Platoon. Serving at the historic Tomb of the Unknown Soldier appealed to Andy, so he applied and was immediately accepted in the platoon. As Andy remembered, "I had joined the military to deploy and defend our country, but I was more than happy with this assignment."

By Spring 2013, Andy was stationed at the Tomb as a Guard; however, the workload (e.g., 26 hours on guard, rotating with 22 hours relief), was not to his liking, so he soon got himself reassigned to another platoon. Yet with the encouragement of both his squad leader and platoon sergeant, he rethought his decision, returned to the Tomb of the Unknown Soldier Platoon, and received his certification making him a Sentinel at the Tomb. (Note: As Andy explained it, anyone who guards the Tomb is called a "Tomb Guard," but only after finishing all requisite training and completing the certification process do the Guards become Sentinels and able to wear the Tomb Guard Identification Badge that is the second least common badge in the entire Army. To date, only 692 of these badges have been awarded by the Army.)

Serving as a Sentinel, guarding the Tomb, was clearly an incredible honor. "I was proud to do it. I was willing to do it. When you're standing there alone at 0200 in the morning, you realize you're being written into history. The Army maintains a log of all the Sentinels who are posted at the Tomb. It's an official Army document."

Andy served as a Sentinel for more than two years. And as one might imagine, he had some – how shall I put it? – rather memorable experiences: "One of the most interesting things I recall – it was also a little terrifying – was chewing out a photographer [in an effort] to maintain security at the Tomb. He had climbed over the chains and the rails [surrounding the Tomb], which, of course, was forbidden. Meanwhile, while I'm yelling at this guy, here comes Vice President Biden to lay a wreath on behalf of the Obama Administration. Along with the VP was virtually the entire military chain of command including the Secretary of Defense, not to mention my platoon sergeant. And here I am, scolding this journalist! Afterward, I was kind of freaking out, thinking this might be 'it' for me. Fortunately there were no negative repercussions. I was told I had done the right thing."

As Andy also explained, the Sentinels would often run from the Tomb to different Arlington Cemetery gravesites to pay respect to those service members interred in the cemetery (sometimes this ritual was used as a minor disciplinary measure; for example, if one of the Sentinels had violated a protocol while on guard duty). After reaching the gravesite, the Sentinel, using a large piece of white paper and a rouge-colored crayon, would rub the headstone to acquire an image of it on the paper; the Sentinel would then return to the Tomb and display the image to his fellow Sentinels (he could then retain it as a personal possession).

Taking part in this unique tradition, Andy one day ran to the gravesite of Private First Class (PFC) Rene Gagnon, one of the six Marines immortalized for raising the Stars and Stripes atop Mount Suribachi on Iwo Jima on Feb. 23, 1945. Returning from PFC Gagnon's gravesite to the Tomb, E-4 Specialist Selga passed through the Robert E. Lee mansion, which was then undergoing renovation. Ascending the scaffolding at the mansion, he took in a breathtaking view at night of the city of Washington, D.C., its myriad pinpricks of light twinkling in his field of vision; much closer, he could see JFK's Eternal Flame. "That remains an awesome memory," Andy said.

In August 2015, Andy was removed from the platoon for medical reasons. While attending Air Assault School at Fort Drum, New York (July 2015), he was suddenly beset by excruciating stomach pains. In the weeks and months that followed, many trips to the hospital ensued, but scans and bloodwork revealed nothing. Like a good soldier, Andy sought to "push through the pain," even during his many hours of duty at the Tomb. Eventually, surgeons at Walter Reed National Military Medical Center, Bethesda, Maryland, performed an emergency operation, revealing that Andy had serious ulcers in his small bowel – ulcers that were dangerously close to piercing the bowel wall, which would have resulted in sepsis, possibly even death.

In April 2016, Andy was assigned to Walter Reed's Wounded Warrior Battalion for rest and medical supervision. (During convalescent leave, he married Emily Crowe on Oct. 2, 2015.) Because Andy's recovery was frustratingly slow, he remained at the hospital for many months. And if that was not enough, he was also diagnosed with diabetes. Thus, in November 2017, Andy made the only decision he could make – he took a medical retirement from the Army.

Shortly thereafter, Andy accepted an internship with the NASA Goddard Space Flight Center (Greenbelt, Maryland), but soon left, as he was still not well enough to work. Throughout most of 2018, while still convalescing, Andy found employment with Operation Second Chance, a military nonprofit that provides financial assistance to post-9/11 military veterans and active duty service members with disabilities. The nonprofit had provided emergency financial assistance to Andy and his family while he was at Walter Reed.

In 2019, due to Andy's continuing health issues, and to be closer to family, he and Emily moved to Arizona, where Andy was unemployed for the year. When his wife received a job offer in Bakersfield, they moved there in 2020. Fortunately, Andy's long recovery has progressed to the point that he is now again employed full time – for Farwest Corrosion Control in Bakersfield, essentially doing the same kind of work as his father, albeit at a more junior level.

As we concluded our interview, Andy said, "To me, it is phenomenal that I am working again. I feel so blessed to be able to do so – to be able to contribute again."

Keep "pushing through the pain," Andy, forging ahead with your life! Our country needs more brave warriors like you.

(Note: This year, 2021, marks the centennial of the Tomb of the Unknown Soldier. To learn about the Tomb's history and significance see http://www.arlingtoncemetery.mil.) 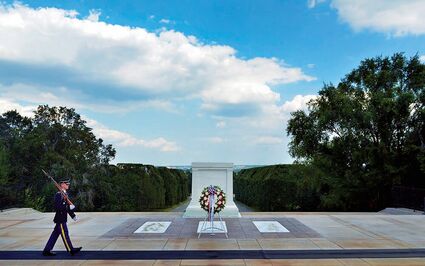 Andy Selga at Tomb of the Unknown Soldier.