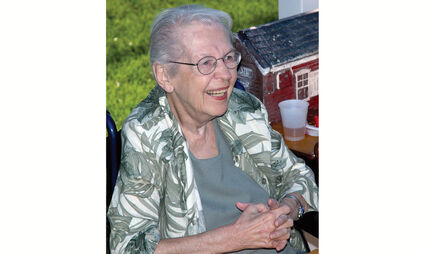 Kathryn Errecart at a going away party for her when she moved from her longtime Tehachapi home to Bakersfield in 2006.

I started playing piano when I was three years old, and played constantly after that. I was going to attend Pomona College Music Conservatory, but then my father was killed in a car accident when I was a senior in high school. After his death my brother started running away from home, and he was found dead in an orange orchard, apparently from pesticide poisoning.

Then it was just my mother and I left, so I decided to continue living with her and enrolled at UCLA on my 16th birthday. I graduated with five majors: Music, English, History, Psychology and Education.

I first moved to Tehachapi in 1946 when I was hired to be the music teacher at Tehachapi High School. When English teacher Freda Hand retired in 1948, I got that position and also married Pete Errecart. In 1952, after the earthquake, we decided to buy the Keene Store and Cafe. I never really wanted to buy it and of course we went gloriously broke! We moved to Keene and ran the restaurant and I was also a substitute teacher in Tehachapi.

I had two children, Larry and Jeannie, and I was all through with domesticity by the time Jeannie started kindergarten, so I went back to teaching full-time in 1962. I also taught private piano lessons for more than 50 years.

I started the Honors program at Tehachapi High to better prepare Tehachapi kids for colleges and universities. Time after time, local kids that did great at THS went to college and either failed or had great difficulty because they simply weren't prepared. I kept hollering and screaming that we needed to do a better job of preparing our kids for college. 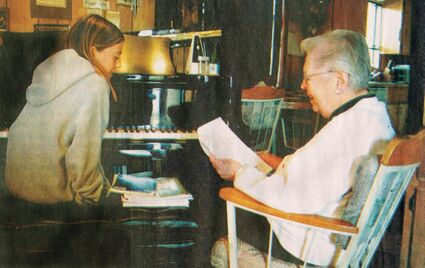 Not only did she teach English, she also was a piano teacher for more than 50 years.

Finally about 1970, our principal at the time, Corky Roberts, said to me, "We picked 30 freshman who were the best students in junior high – do something with them," and so I did. I started an Honors English program and taught the kids mythology, Shakespeare, author studies, composition and more through all four years of high school. This gave them some insight into college level academics and they left better educated and more confident in their abilities.

Kathryn Errecart was a teaching legend at Tehachapi High, retiring in 1990, and she influenced literally thousands of her English and music students over the years. With her formidable intellect, high unyielding standards and delightfully wry sense of humor, she made an indelible impression on countless lives. She was a bastion of intelligence in our town.