Dr. Sam Conklin: a long but unexpected career as a physician 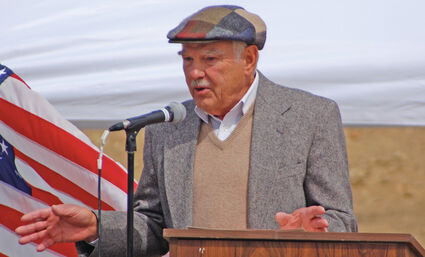 Sam Conklin speaking at the groundbreaking ceremony for the new Tehachapi Hospital in 2013.

For some people, their career and life trajectory seem almost predetermined, as they follow in their parents' footsteps or otherwise make predictable choices about their occupation. That wasn't the case with beloved Tehachapi physician Dr. Sam Conklin, 84, the next to the youngest of 12 children whose father was a carpenter and small farmer in the mountainous region of Eastern Pennsylvania.

Sam worked in construction in Connecticut after he got out of high school, and as he admits, "I never really planned on going to college." It was a combination of encouragement from his mother, good luck, a wonderful wife and a near-fatal car accident that helped him decide to put in all the hard work and dedication necessary to become a physician.

Sam and his wife Betsy are longtime Tehachapi residents, first moving here 50 years ago, and are still Tehachapi residents. Sam worked for decades as a local doctor and served for many years on the Tehachapi Healthcare District Board. Sam is now experiencing ill health and was recently placed on hospice care.

Sam was born on March 3, 1937, to Claude and Esther Conklin, and during his early childhood he attended little two-room schools in Wellsboro and Asaph, Pennsylvania. The family had a modest income – Claude had worked in a submarine factory during World War II but after the war ended, he was one of millions who found themselves unemployed, and he struggled to provide for his family, particularly during the harsh winters.

The family moved to El Centro, in California's Imperial Valley, in search of a better (or at least warmer) life. One day when he was 16, Sam got in a car and went along with two friends who were going swimming at Sunbeam Lake near El Centro. The young driver was inattentive and ran into a moving van, leaving one passenger dead, Sam with numerous broken bones, and the driver himself with serious internal injuries.

Sam had been born at home and had only seen a doctor one time in his life, when he had a smallpox vaccination, so his lengthy hospital stay was an entirely new experience. He asked many questions of the doctors who treated him, and he was impressed by their knowledge and skills. He eventually recovered from the accident and gained a new awareness of doctors and a respect for their ability to help others.

Knowing he wouldn't have any financial help from his family, Sam didn't even consider going to a university when he graduated from high school, but his mother encouraged him to further his education so he did go to Imperial Valley Junior College, focusing somewhat on accounting. He later worked in construction, and then thought that maybe he would try to attend medical school, but since that seemed like a long shot, he decided to go to X-ray technician's school in Philadelphia so he would have something to fall back on if med school didn't workout. It was then that he had the good fortune to meet a girl in church – her name was Betsy Schmiel, and she had just graduated as a registered nurse.

Sam decided that she was the one for him, and the two married on September 10, 1960. "From the very beginning, I've been blessed to have Betsy as a partner," Sam told me. "I made a great choice, and I'm very fortunate that she agreed to marry me." Sam applied and got accepted to medical school at Philadelphia's Temple University, though Temple wouldn't accept all of the classes he had taken before so Sam first had to attend night school to gain more credits, while working during the day as an X-ray tech. He later graduated from Hahnemann Medical College, now known as Drexel University.

Sam graduated in 1967 and then the Conklin family moved back to California and Sam did his internship and residency at Long Beach Memorial Hospital. And Sam's first job as a full-fledged doctor? Working at an outpatient clinic in the Kern County outpost of Mojave. The town hadn't had a doctor for several years, so Mojave druggist Carl Stone had led an effort to raise $55,000 to build an outpatient clinic, and brought in newly-minted Dr. Sam Conklin to staff the facility.

Betsy, raised in the green, forested Pennsylvania landscape, was less than thrilled. "We went back to Pennsylvania to visit my family and then drove straight to California," she recalls, "I cried the whole way from Pennsylvania to Mojave."

Sam enjoyed helping the people of the Mojave area, but he was overwhelmed by the number of cases and the fact that he wasn't getting to spend any time with Betsy and their children – he routinely worked long hours seven days a week. Experiencing the same problem was another nearby physician: Dr. Vince Troy, who was the only doctor in Tehachapi. "Dr. Troy hadn't been out of town in five years, he was constantly on call, and so he invited me to move up to Tehachapi and join him," Sam explained. "It seemed like a good fit for both of us, so in 1970 we moved up to Tehachapi."

Drs. Conklin and Troy both saw patients at an office on Mill Street that later housed the dentist office of Dr. Markiewitz and Dr. Kerr, and they traded shifts of being on call at Tehachapi Hospital. This arrangement worked well for Sam and his family – while he was still busy, Sam had more time to spend with Betsy and their children Gary, Brian and Christy. Over the years, Tehachapi residents grew very fond of the soft-spoken, respectful Dr. Conklin, who they encountered either at his practice or at the emergency room at Tehachapi Hospital.

In about 1976, Dr. Troy, Dr. Conklin and Dr. Brian Hiebert went together and built the Oak Tree Medical Center on Mill Street. They all saw outpatients at the medical center and took turns covering the ER at Tehachapi Hospital. In about 1985, Sam closed his practice and focused exclusively on working mostly nights at the ER.

In 1988 he was ready for a new challenge so he accepted a job with McDonnell Douglas in Saudi Arabia, treating employees of the big aircraft manufacturer who worked as a support personnel for the F-15 fighter jets that had been purchased by the Saudi government. Sam and Betsy spent two years living in Saudi Arabia.

"It's really a no-fun society," Sam recalled. "People living under such strict conditions tend to be very serious. If you smile, there must be something wrong with you." Sam worked as a supervising physician, visiting the four clinics that McDonnell Douglas operated in four different parts of Saudi Arabia. Seriously ill patients would be airlifted for treatment to England, and Sam would accompany the patient on the three-hour flight.

Sam and Betsy accepted another overseas assignment from 1993 to 1995 when Sam performed a similar job for General Dynamics, which had employees in Cairo, Egypt providing technical expertise in support of M1 Abrams tanks. During their time in Saudi Arabia and Egypt, the Conklins managed to return home to Tehachapi for the holidays to see their families and friends. Sam continued to work in the ER at Tehachapi Hospital until 2004, and helped out at clinics until 2012, when age-related hearing loss made it difficult for him to hear some patients.

Sam has had a wealth of experiences in his life: in addition to his 40 years as a doctor, he also wrote two books of fiction involving physicians entitled No One To Trust and All or Nothing, and he and Betsy continued their global travels with humanitarian missions to Vietnam, Bangladesh, Honduras, Chile, Columbia and Mexico. Betsy volunteered for many years at the Guild of Tehachapi Hospital Thrift Store. He and Betsy have been devoted parents and grandparents who have always been active in the lives of their growing family.

"Tehachapi has been a very good place for us," Sam is quick to state. "People have treated us very well, and this has been a great place for our kids to grow up. We also had some of our grandchildren grow up in Tehachapi as well, and we're delighted to still call Tehachapi home after all these years."

Sam Conklin served the Tehachapi community well for many years, with competence, compassion and class. He has been a role model as a doctor, husband, father, grandfather and overall high-quality human being. We are grateful to him and Betsy. 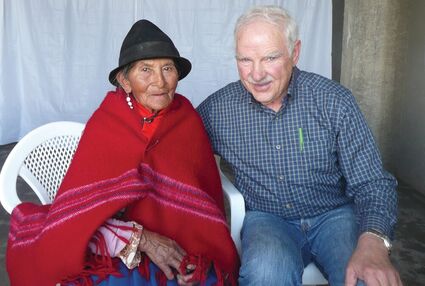 Sam and an Andean woman on one of his humanitarian trips.