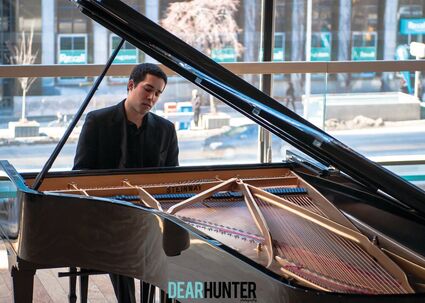 The Tehachapi Symphony Orchestra, under the direction of Dr. David Newby will be performing with a live audience on Sunday, Oct. 31, at Country Oaks Baptist Church beginning at 4 p.m. Country Oaks Baptist Church is located at 20915 Schout Road, Tehachapi. The concert will be held in honor of Paul Granna who played tuba at the June concert, but just recently passed away from COVID-19. Please wear a mask to enjoy the concert.

The program will feature renowned Pianist Jason Stoll in Franz Liszt's Piano Concerto No. 1. The concerto was composed, and re-composed, and revised again and again over a quarter of a century until it reached an almost-finished state in 1853. Then in 1855, following the work's premiere in Weimar, with the composer at the piano, the composer continued to alter some of its details. A single theme dominates the entire concerto, a theme that is transformed several times throughout the four connected sections.

Southern Californian pianist Jason Stoll has garnered many praises and awards for his performances throughout his career across the states and internationally. Over the years, Stoll has been both participant and performer at several notable summer music festivals and has had the privilege of participating in masterclasses working closely with many distinguished artists. Currently, Stoll is a piano instructor and lecturer, a freelance pianist and a masterclass presenter. He is also a fan of the NBA, tennis, juggling, bowling and ping-pong.

Ludwig van Beethoven's Egmont Overture chronicles the sixteenth century story of Lamoral, Count Egmont of the Netherlands, who defied a Spanish attack captained by the Duke of Alva. Beethoven wrote a heroic piece about the struggle against oppression and the eventual triumph of liberty creating a journey from darkness into light.

George Butterworth's First English Idyll was completed in 1911. The music is established in the folk song and beauty of the English countryside. The young English composer, a second lieutenant in the 13th Battalion of the Durham Light Infantry, was killed by a sniper at the Battle of the Somme on Aug. 5, 1916 at the age of 31.

Zoltán Kodály was born in the Hungarian countryside, and when he was just a few years old his family moved to the village of Galanta in northern Hungary. He collected Hungarian folk music by going out into the field. Kodály patterned his Dances of Galánta after the typical eighteenth century Hungarian dance performed by the military to lure young recruits. Dances of Galánta was composed in 1936 which was commissioned for the 80th Anniversary of the Budapest Philharmonic Society.

Audience members may meet Dr. Newby, Jason Stoll and musicians following the concert. All Tehachapi Symphony Orchestra concerts are FREE to the community. For more information, see http://www.tehachapiorchestra.com or call (661) 821-7511.