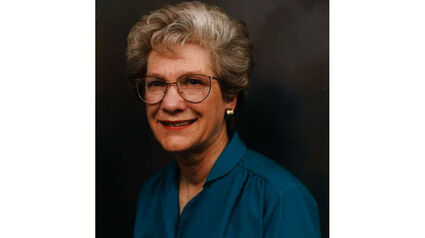 Shirley Ketelsen left us peacefully on Sunday, Oct. 10, 2021, at the Shafter Nursing Rehab, which had been her home for three years. Family members were with her at the end. She was 89 years old.

Family life was busy for Shirley, as she worked at Sacred Heart Hospital, also as an aide at the local school and juggled the children's activities. The Ketelsen family liked nothing better than to pack up a picnic and drive to the Sequoias or Kings Canyon to get out of the heat of the Central Valley of California's summer months.

Bill passed away in February of 1993 and that began another new chapter of her life. Shirley continued to work at the hospital, was active in the Catholic Daughters and as a liturgy reader at church. Shirley had a wonderful group of friends and family to keep her busy.

For the last 14 years of Shirley's life, she had marched down the path of Alzheimer's. She came to live with her oldest daughter, Kristine, in Tehachapi, California. Her time was busier even at this stage of her life. She had her own activity group with Central Valley Caregivers Resource. She attended her grandchildren's swim meets, plays, soccer games, band concerts and even robotic competitions. She attended Mass every Sunday.

Shirley spent her final three years at the Shafter Nursing Rehab. This facility had a Memory Care unit just for Alzheimer's patients. The staff was very caring and understanding of her special needs.

Shirley is preceded in death by her husband, Bill Ketelsen, her brother, John Carl Schlaich, and her parents, Bea and Senes Schlaich. She is survived by children, Kristine Duke, Karen Hall, and Eric Ketelsen. Shirley has four grandchildren, Amanda and Jeremy Duke, and Eva and Dusty Hall. She is also survived by her siblings, Gary Schlaich, Jim Schlaich, Marian McClure, Adele Method, and Patty Athy.

Shirley always had a calm and positive spirit. We will miss her.

In lieu of flowers, the family would appreciate donation to the Alzheimer's Association (www.alz.org) and the Central Valley Resource Center (valleycrc.org).