Once upon a time my daughter Sarah J. and I made a trek to Eastern Kern County to see a B-29 Aircraft named Doc. Doc was stored at the Inyokern airport, right at the front gates for all to see. It was in no condition to do any flying and was being stored for possible restoration or spare parts for another B-29.

We ended up doing many treks to this area back then as a family. We raced Mustangs at a part-time drag strip that was at one time the oldest operating drag strip in California. I also flew sailplanes in the area. I had many fun and safe flights there. The desert communities of Inyokern and Ridgecrest are only about 60 miles from Tehachapi. It's a fun day trip.

My daughter was about five years old when we took our first trip and I was trying to show her a slice of life in this WWII war bird. This B-29 was a training aircraft and never got involved fighting in the war but it was a very important part of training pilots and crews to keep them up to speed for when they got to the frontlines.

In July of 1951, Doc Superfortress was assigned to radar calibration at China Lake, California with a few other B-29s known as the Seven Dwarfs. In

My daughter and I never had any idea that the ship would be restored to new condition. That had been over 20 years ago and you can never say never.

On Oct. 2, I got word that this aircraft was visiting the same place where it had been stored many years ago. I had to see it again.

Doc is one of 1,644 B-29 Superfortresses that were manufactured in Wichita, Kansas during WWII. In 1987 the people who found Doc said that the Superfortress was rotting away in the Mojave Desert. Today, with lots of money and very hard work, this historic war bird has been restored to flying status. This proves that people volunteering and giving of themselves are alive and well in the USA. 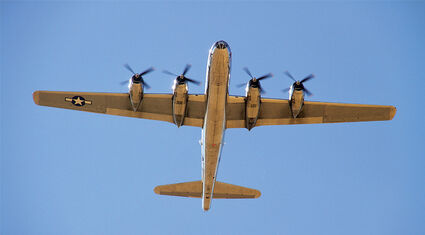 For over 15 years hundreds of volunteers worked on Doc in Wichita where they have many skilled workers who made it possible to get this B-29 back to flying condition. The crew and friends of Doc also said it's really a brand new aircraft.

I got to see a landing, one of the ride flights that are done, and the sound was fantastic. I learned that the cost for a seat for a half-hour ride in Doc is around $1,500 due to the high cost to operate this War Bird. If you want to sit up by the pilots this can be arranged, as well.

It was fantastic to see this historic B-29 Superfortress in operation in brand new condition for all to see. It's ironic and interesting that the Navy at China Lake Naval Weapons Center were using some of these stored B-29s for target practice at one point after WWII.

I am sure glad Doc was saved!