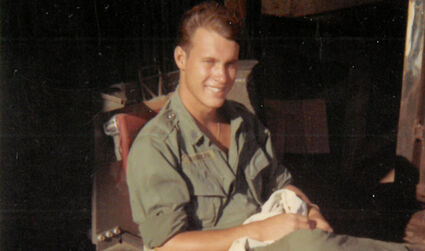 Barry Bongberg relaxing on one of the helicopter seats he was repairing.

(Note: This is the 24th article in a continuing series about local military veterans and their service to our great country.)

"As we landed in Cam Ranh Bay, Vietnam, our commanding officer gave us a little welcoming address. 'Now boys, I want you to shake the hands of the person on your left and right. One won't be going home alive, the other will return wounded, or diseased. Good luck.' This little speech hit us all with the true realities of fear and confusion. This just could not be happening. It was all happening much too fast." Excerpted from "Dear Mom & Dad. Letters Home from Vietnam, 1967-1969," a memoir of war by Barry Bongberg.

Barry was born October 30, 1948. At the time, his father, a World War II veteran (as were both his brothers and sister, who had been a registered nurse at Pearl Harbor on December 7, 1941) was enrolled in dental school at the University of Pennsylvania. Barry's mother was a stay-at-home mom (her brother had also served in WWII). Eventually, Barry would have two siblings: an older brother and younger sister who died of breast cancer in 2009.

In the early 1950s, the Bongberg family moved to Oregon, where Dr. Bongberg was employed by the state as a dentist. A short time later (1954), they moved to Shafter, where Barry grew up from the second grade through high school. At Shafter High School he played junior varsity football for three years. He spent the summer between his junior and senior years picking lemons in Santa Barbara. As Barry recalled that summer with a twinkle in his eye: "It was in Santa Barbara that I discovered girls and beer!"

"I had a great childhood in Shafter," he said. "I was in the Boy Scouts. Dad took us hunting and fishing. It was a wonderful place to grow up. I had a righteous family. A strong work ethic was instilled in us kids; if I wanted new clothes, I had to buy them myself."

Barry was just 17 when he graduated from high school in 1966. In the fall of that year he enrolled at Bakersfield Community College; yet as he candidly admitted, he wasn't a serious student, and after a short time stopped attending most of his classes. His brother, a Marine, was already in Vietnam; as were his two best friends (also Marines). "At least I had the sense to know I wasn't going anywhere with my life. I had no ambition for school. So in December 1966, I went down to the Federal Building on Truxton Avenue in Bakersfield and volunteered for the draft."

In February 1967, shortly after his 18th birthday, he was inducted into the Army. At Ft. Lewis, Washington, he got high marks on his testing and, as a result, he was given the chance to go to signal school at Ft. Gordon, Georgia – keeping him out of the infantry – in exchange for agreeing to an extra (third) year of active duty in the Army. Barry readily accepted the Army's offer, but first up was basic training, which took place at Ft. Leonard Wood, Missouri. At Ft. Gordon, Barry trained to be a helicopter avionics equipment repairman (one of the training specialties offered at the signal school), completing the course in about five months.

The night before he left for Vietnam, Barry, a skinny, fun-loving teenager, painted the town with a good friend, getting "wasted" on beer. On Oct. 25, 1967, he landed at Cam Ranh Bay, Vietnam, a massive military complex in an inlet of the South China Sea, with an air base, a naval yard, Army and Marine detachments.

Private First Class Bongberg was first assigned to the 123rd Aviation Company, 449th Signal Detachment (1st Aviation Brigade), a helicopter detachment south of Chu Lai in the I Corps sector, the northernmost corps sector in South Vietnam. Some months later, his company would be combined with the 723rd Maintenance Battalion, Americal Division, "but we didn't change our location, we just got a new mailing address."

Barry was soon performing maintenance work on helicopter avionics and flying occasional missions as a door gunner. "As the months passed, some died, some were wounded and those surviving all tried to adapt in some crazy sort of way. This adapting was so scary. This miserable war was taking away our youthful aspirations and dreams. These long forgotten desires had been replaced by the war realities of mud, blood, beer, rats, drugs and losses. We prayed, we laughed, we cried, we got high. Survival. We adapted." Excerpt from "Dear Mom & Dad."

The worst period of Barry's service in the Vietnam War came in late January and February 1968 when the Viet Cong and the North Vietnamese People's Army launched their spectacular Tet Offensive, striking targets across South Vietnam – a major escalation of the war that had a major psychological impact on the American people and convinced President Lyndon B. Johnson not to run for reelection. At the onset of the enemy offensive, Barry and his fellow soldiers sheltered in their bunkers for several days. "They blew up the ammo dump at Chu Lai. We were being heavily shelled. Guys were screaming for their mothers. It was ugly. A Chinese rocket got stuck in a sandbag in the bunker behind us. It was a dud. If it had exploded it would have taken us all out."

Throughout his service in Vietnam, Barry stood guard duty on a regular basis, taking serious incoming enemy fire at times. All told, he flew at least 10 missions as a helicopter door gunner, among them some extremely dangerous night missions. "It got to a point," he said, "where I had [my superiors] take me off the roster to fly as a door gunner. It was not in my MOS [Military Occupational Specialty], and it just got too dangerous."

After Barry had completed a year's service in Vietnam, he received orders to return to the States (Ft. Benning, Georgia). However, despite the myriad dangers associated with service in a combat zone, Barry decided instead to extend his tour in Vietnam, which enabled him to quality for an early discharge from the military. As he recalled, "by now, I was pretty acclimated to Vietnam, I was getting flight pay, combat pay, and I'd already advanced in rank to sergeant. And I didn't want to do stateside duty, so I extended for six months."

In the spring of 1969, Barry extended for an additional five months – a decision which, due to recent changes in Army personnel policy, further reduced his active duty service commitment. On Sept. 20, 1969, he penned his final letter to his parents: "I am now returning home after 23 months in this war. I am 20 years old with the rank of sergeant having received three medals of commendation in the war. I'm still too young to vote and to buy beer back home. I will beat this last letter home." Excerpt from "Dear Mom & Dad." (Note: his citations were: Meritorious Defense Service Medal; Vietnam Service Medal with two Oak Leaf Clusters; Vietnam Campaign Medal; Army Commendation Medal for Valor Against a Hostile Force.)

Returning to Ft. Lewis, he was discharged from the Army. Well aware of the problems Vietnam veterans were now facing at home, he had the presence of mind to have his parents send him civilian clothes so he wouldn't have to travel home in his uniform. "It was that ugly out there for us Vietnam vets."

Now more mature, more motivated, Barry got on with his life in a big way. He graduated from Santa Barbara Community College in 1972 with an Associate of Science degree in Business Administration. He then transferred to Fresno State University, picking up a BA in humanities and photography (1974).

From 1974 to 1983, he resided in Sonoma County (Santa Rosa, California), working initially as a professional photographer and later as a piano repairman. In 1978, he married Karen, and they soon had a daughter, Erica. However, the marriage ended in divorce, after which Barry decided to return to Shafter.

In 1990, he completed his MA in Behavioral Science at California State University, Bakersfield. In the years that followed, Barry made a successful career in the field of health and human services, which included working as a counselor at several local prisons and, from 1994-2001, living in Alaska and working with the mentally ill, drug addicts and homeless. He retired in 2007 as a supervising mental health clinician in Kern County.

For more than 50 years, Barry had in his possession a box of letters he'd written to his mother and father from Vietnam. He'd begun writing to them within 24 hours of his arrival in-country, and continued to compose letters to his parents – 268 letters to be exact – throughout his almost two years in Southeast Asia.

But the letters had languished in their box, until recently, with the encouragement of his daughter, Erica, and the awareness of his advancing age, Barry decided it was time to open the box and begin to type the letters into a manuscript for Erica, her three children and other loved ones. He typed them, word for word and, in early 2021, with the help of Ms. Sara Olsher (layout and design), he published all of them in his memoir. 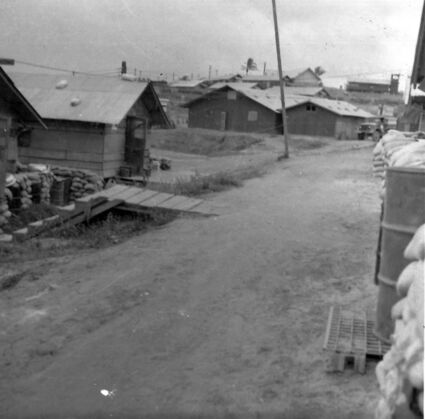 A partial look at southern perimeter of Chu Lai military base.

Only months before, Erica had lost her valiant battle with breast cancer, passing away on Sept. 17, 2020. In June 2019, Barry and his daughter had visited our nation's capital, guests of Honor Flight Kern County. "It was such a healing and precious experience to share together. It was the best father and daughter experience ever!"

(Note: Barry's book is available through Amazon.com. All proceeds are dedicated to the ongoing fight against breast cancer.)