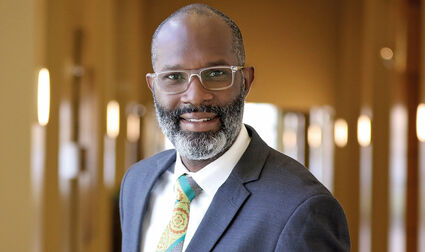 Recently added to the already impressive staff at Adventist Health Tehachapi Valley is their new Administrative Director of Operations Edward H. Martin II. In that capacity, Martin will be acting as the President's representative in the community. Martin comes to Tehachapi from Riverside where he worked in management with SAC Health Systems in San Bernardino. He has over 15 years of management experience in national and international health programs and services.

Martin was born in Washington, D.C. and raised in Maryland. He graduated from Oakwood University in Huntsville, Alabama in 2000 where he majored in biology and education. During his college years he had the opportunity to do mission work in Port-au-Prince, Haiti teaching kindergarten through 10th grade, as well as ESL classes. It was during this period that he became a proficient scuba diver.

He received his Master of Health Administration from Loma Linda University in 2006 and soon after was appointed Executive Director for Adventist Health International. In this capacity, he was able to spend time in Zambia and Malawi in Africa and travel twice again to Haiti between 2014 and 2017.

It was last year during a mayoral candidate forum in Riverside, that Martin, as a health care liaison, was introduced to Dr. Grace Williams who was running for Congress from Riverside. Williams was, and still is, the Executive Director of the Joint Powers Authority in Riverside. After listening to several of her podcasts, he contacted her and invited her for coffee and spaghetti saying he wanted to know more about her platform. Martin now says with a smile,"Essentially our first date was a political event."

They have been married about six months, with weekends now spent either in Tehachapi or Riverside, until his wife can join him here. Martin said he was not even thinking about making a career move when he saw the AHTV job posting. With his wife's encouragement, he applied for the position and the rest is history.

Martin is a mountain bike enthusiast and said he is looking forward to trying out the TMTA Lehigh Trails. He is also a musician playing acoustic guitar and saxophone (an instrument he has played since he was 13 years old). He is also a Rotarian and was president-elect of his local group until moving to Tehachapi.