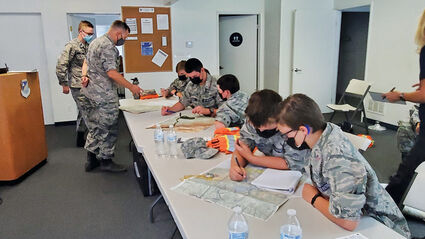 Cadets during map and compass training.

Tehachapi Composite Squadron 46, Civil Air Patrol, was able to participate this weekend in much needed Emergency Services training to better serve our community. Our cadets learned how to use a compass to determine a bearing, and how to read and use a map. These are the basic skills needed to be part of an Urban Direction Finding (UDF) Team as well as a member of Civil Air Patrol's Ground Search Team. Cadets also learned how to use the UDF equipment to triangulate a signal. As part of their training, they were tasked with finding an activated beacon that instructors hid at the airport in Shafter, CA.

The cadet and senior staff at Squadron 46 will continue to volunteer their time through training in order to be prepared to fulfill their CAP motto of Semper Vigilans (Always Vigilant).

To learn more about what the Civil Air Patrol does in Tehachapi, we invite you to join us on Tuesdays at 5:30 p.m. at the Tehachapi Municipal Airport building located at 314 N. Hayes Street, Tehachapi. Adults can join our squadron as senior members and put some of their valuable skills to use for our great community. 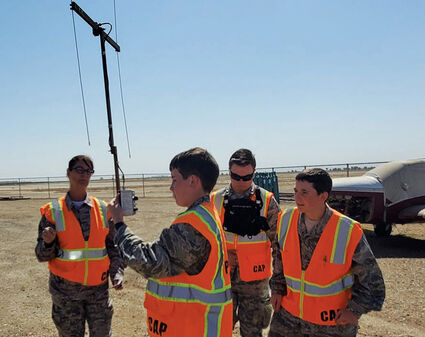 Civil Air Patrol is the longtime auxiliary of the U.S. Air Force and as such is a valued member of its Total Force. In its auxiliary role, CAP operates a fleet of 560 single-engine aircraft and more than 2,000 small Unmanned Aircraft Systems (sUAS). It performs about 90% of continental U.S. inland search and rescue missions as tasked by the Air Force

Rescue Coordination Center and is credited by the AFRCC with saving an average of 82 lives annually. CAP's 54,000 members also perform homeland security, disaster relief and drug interdiction missions at the request of federal, state and local agencies. Operating as a nonprofit organization, CAP also plays a leading role in STEM/aerospace education, and its members serve as mentors to more than 20,000 young people participating in CAP's Cadet Programs.